By: Nikolaas VerhulstPosted on January 21, 2020

After one whole blog post about high culture, we descend once more into the dank morass of the worst type of popular culture: commercials. Our object of study today is a 2016 commercial for the Kia Optima starring American basketball star Blake Griffin. Griffin and Kia had partnered up before and have again partnered up since, to some considerable success, if success is measured by YouTube compilation videos. The main point of this particular commercial seems to be that Griffin is ‘in the zone’ and it is suggested that one can get there by the simple virtue of driving a next generation Kia Optima.1 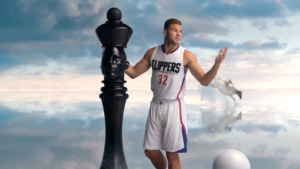 What on Earth chess has to do with any of that is anyone’s guess. Perhaps being completely ‘zen’ or ‘in the zone’ is associated with chess? But is it, really? A great many people get incredibly nervous and stressed when playing a game of chess.

But the realism of cultural associations and expectations around chess need not concern us; we only care about the chess itself. The position on the board is the following:2 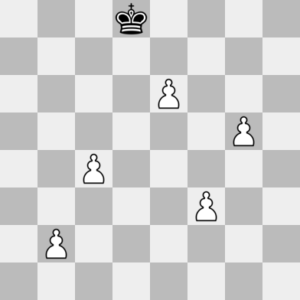 Which is, well, not really a normal position. In fact, the unnamed guy driving along notices this, too:

Well, no; there’s also a black king, but I get his point: the white pieces are all pawns and the lone black king also looks weird. He gets a perfectly baffling reply:

delivered with a resigned smirk. What? Is that a pun? A reference I don’t get? A jab at the players in the other team?3 Is Griffin just locked up here in the zone with not even a complete set of chessmen to keep him company? If you buy a Kia Optima, would you end up in a vast, featureless emptiness like Bompanero in a previous post? Is this actually a commercial — or a cry for help?

Realism: 0/5 Obviously, there should at least be a white king for the position to have any pretences for realism.

Probable winner: Not Griffin. He seems to be playing black and there is quite literally no chance of him ever winning. Yeah, I really don’t think they thought this one through.