Nero is, or was at least, incredibly famous in Flanders and completely unknown outside of it. It is a comic with a cast of colourful characters, like Adhemar, the baby who lectures at Oxford, Abraham Tuizentfloot, the long-bearded pirate who fought at Trafalgar and Abukir, Petoetje, an adopted Papuan prince who became a pop star after dancing on his head, and many, many more. It was the brainchild of Marc Sleen who wrote and mostly drew the series for over fifty years and for more than 160 (one hundred sixty!) volumes: enough to gain a place in the Guinness world record book for longest running comic series drawn by the same person. Volume 143, De dood van Bompa [Bompa’s death], is the last instalment of a trilogy about Nero’s grandfather. It deals with his dead and the war between good and evil for his soul. In strip 28 we see him stuck in limbo:1 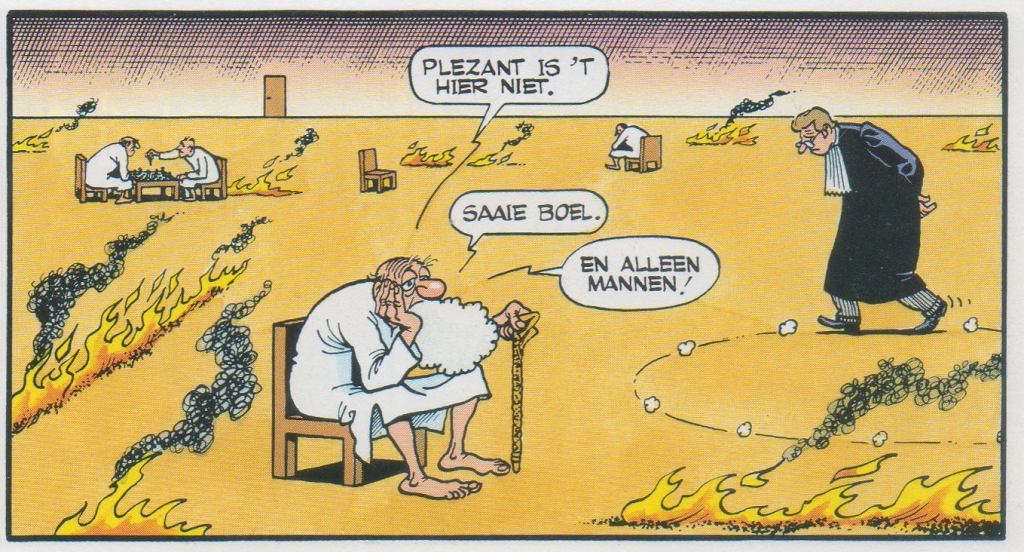 It shows an interesting but rather benign depiction of Hell’s prequel as a monotonous, uni-coloured plane, with a few lines of flame and the odd wooden chair as its only features. The idea is, no doubt, to portray limbo as the apex of boredom – but that cannot be: they’re playing chess in the background!

Okay, perhaps I should translate the text. It has no bearing on anything, but you might be curious:

But let’s leave grampa aside for a moment and focus on what’s important.

Very rarely has a reconstruction been so fraught with difficulty. All we have to go on is a teeny-weeny little rectangle in the background, drawn with a few pen strokes. I can’t even tell whether it is a proper 8×8 board with a white square in the players’ right hand corner. The pieces are just some blobs which are really hard to recognize. One of them seems to have a horse’s head, making it a shoe-in for the role of a knight. The tallest of white’s few pieces is sure to be his king and, since there is no similar-looking black counterpart on the board, black’s king must be in his hand. All this, and some educated guesses3 about pieces position, leads me to suspect that the actual position is not entirely unlike the following:4 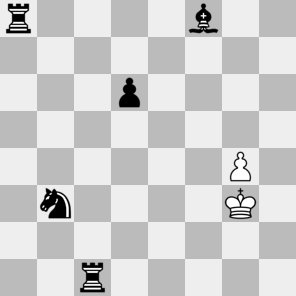 which gives a pretty decent explanation for why white is looking so depressed. But black is looking just as miserable! Why? Is it because white is playing on in a completely hopeless position? Is it, perhaps, the curse of limbo that can only play against people who are either so much weaker or so much stronger than you that you never get a proper game? That’s terribly cruel! Jesus, God, how low is your limbo?!

Realism: 3/5 I have two subtract points because it seems highly unlikely that, at this advanced stage of the game, the rook and bishop would still be on their home squares, but there’s nothing majorly wrong here.

Probable winner: Black. This is a position that the weakest of club players could confidently win against the world champion.

1. [This drawing actually raises some pretty interesting questions. Bompa himself is in his pyjamas because he died in them. The same presumably holds true for the two chess players and the lonely guy on the chair in the middle. But what’s with the lawyer? Did he die in court? Was he shot? did Marc Sleen predict the mocro maffia?] ↩
2. [Clearly he hasn’t noticed the queens yet.] ↩
3. [Not very educated ones, though. Perhaps they finished high school, but nothing more.] ↩
4. [With thanks to the late Douglas Adams and the early apronus diagram editing software.] ↩