Some twenty years ago, there was a regular contributor to the magazine Chess writing under the name C. P. Ravilious. He mainly wrote a column called Collectors’ corner, which had all sorts of interesting stories and pictures from the early history of chess, but sometimes he contributed standalone articles about similar topics and it is via one of those that I first encountered today’s subject: two engravings after pictures by Frank Stone. Apparently, these engravings were highly popular in chess circles somewhere around 1840. Why, I don’t know, because the art is nothing special and the pun is cheesier than a giant wheel of Gouda, but perhaps people were just so starved for anything chess-themed to hang on the wall of their club that they were willing to take anything.1 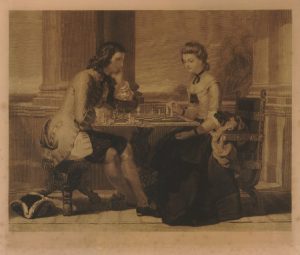 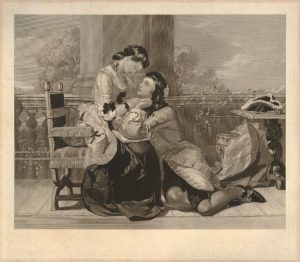 But now let us consider the position on the board. A detailed and accurate portrayal of a reasonable position was obviously not the artist’s main intent. My best guess is the following:2 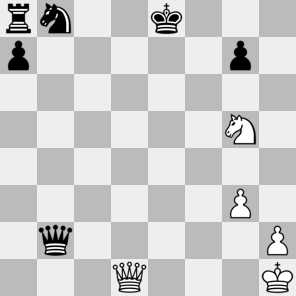 and it’s not an especially good one. Basically not a single piece’s identity is completely certain — although I would be very surprised if the one on g5 were not a knight — but, overall, the above reconstruction seems the most likely.

But the biggest mystery here is what happened between the two pictures. Clearly, ‘Mated’ is supposed to take place only a short while after ‘Impending mate’, but some very strange things happened in this brief span of time. These two are deeply in love, so, obviously, they decided to get push the guy’s stool aside and fetch a coat to drape over it, move the girl’s chair to the left of the table, put the tricorne3 on the chess board, clear away the pieces, and then get to the flirting — in a very uncomfortable-looking pose, I might add. I guess that, in Victorian times, priorities were different.

Realism: 3/5 The position is probably more realistic than the rest of the scene. Still, it doesn’t get more than 3 points: the pieces/pawns ratio is unreasonably high, black’s king is still in the centre, and his queen’s side is undeveloped.

Probable winner: Black certainly has the best chances, but converting is not as obvious as it looks: white has a lot of checks which probably allow him to pick up the g7 pawn and then he might be able to stir up some counterplay on the king’s side.

1. [The image below comes from the rather brilliant website of British Museum. Note that, despite their brilliance, they mixed up the names of the two engravings.] ↩
2. [Nowadays, Stone’s work is automated.] ↩
3. [Feeling shunned, the hat later fled south where he inspired de Falla.] ↩