It’s a — it’s a cookbook! When I started this blog, I was expecting many things. I knew there would be films, comic books, and TV-series. I expected there would be music videos, some book covers, the odd painting perhaps. What I most definitely did not expect was a cookbook. A cookbook! Cookbooks contain recipes, not chess scenes; pictures of cheesecakes, not chess boards. At least, that is what I thought, until Het caravan kookboek [originally titled Caravan cookbook]1 was brought to my attention. There, on page 110, to the left of a recipe for olives with garlic, chilli, and parsley, we see two pictures of some guys at a chessboard. 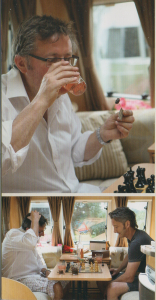 The author, too, was probably assuming that I would not be scrutinizing cookbooks.2 But, just as a safety measure, they decided to strategically place a small bowl of olives and a highly suspicious-looking drink right next to the board to partly obscure it, so that even if I were to stumble upon their transgressions, I still wouldn’t be able to indemnify them. All this makes me suspect that they are probably cooking up all sorts of horrible concoctions here, abominations in the eye of Caissa that should have never seen the light of day.

So let’s check that hypothesis. In the bottom picture, there is just a single one black pawn standing next to the board, so that’s probably the only piece that has been taken. Clearly, the third rank is empty and there a few pieces which I can place with absolute certainty; the rest is guesswork. Behold the result of this guesswork:3 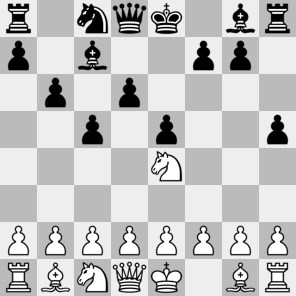 and this immediately explains why these people are in a caravan: no landlord would want such uncivilised tenants.

White seems to have spend his time mucking about with his knight for moves on end, while black in the meantime built up a pawn structure optimised for shutting in his dark-squared bishop, interrupted once by a bold step into nowhere with h5. But the worst is that they switched the places of knights and bishops!

Realism: 0/5 And that’s all there is to say about that.

Probable winner: Neither side has spent much time on development or indeed trying to accomplish anything at all. If it continues like this, the game will peter out to a draw by virtue of the 50 moves rule.

1. [Monica Rivron, Het caravan kookboek, Karakter uitgevers B.V., 2011. Presumably, the English version contains the same picture.] ↩
2. [But I do! Nowhere, nowhere, can chess-abusing miscreants hide.] ↩
3. [You can cook up your own diagrams here.] ↩