It was a long time ago. It was a simpler time then and there was a certain sincerity to the world, born of simplicity more than of innocence. There was still a glimmer of optimism alive in your servant. Yes, in my previous blog post about book covers, I made a footnote that chess book were ‘obviously’ excluded. My reasoning was that chess books are usually written by people who are knowledgable about chess and therefore pick a reasonable position for their cover. In fact, most chess books are about openings and then you can just stick some tabiya on the front and be done with it. Alas, once again, I overestimated the care people put into their work. 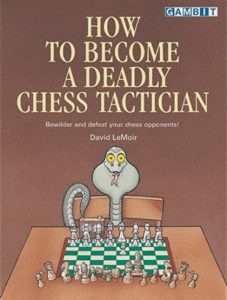 David LeMoir, How to become a deadly chess tactician, Gambit

I have not read this book, but judging from Amazon’s ‘look inside’ feature it seems to be a standard tactics books with a few lightly commented standard games, a bunch of exercises, and some reasonably well-drawn but not terribly funny cartoons. That’s a serious flaw, because funny is clearly what they were going for, to which the cover also bears witness.

I realise they are trying to convey the idea that the cobra who’s playing white is such a deadly tactician that he completely blew away his opponent in a razor-sharp battle, but it just doesn’t work. First of all, the cobra is never going to win, since his opponent has no king that can be mated. Secondly, he is hogging the clock in a most unsportsmanlike fashion. Thirdly, he appears to have played 1. d4 2. Kd2 3. Qe1 4. Kd1.

Probable winner: I don’t know who’s going to win, but I’ve never hoped so hard that a mongoose would come by. 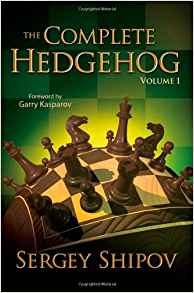 Now this one I have read. The content is excellent, but the book is severely hampered by a clunky translation and the type of typographical errors which I thought had been eradicated by modern technology, much like rinderpest and smallpox. And by the cover.1

Seriously, would you buy this?! Sure, the hedgehog is a somewhat unusual opening, but even it does not include putting ones king on f5 or ones bishop on h8. And that’s just scratching the surface of the madness: since the corner square in the lower left is black, it must be h8 or a1, implying that there is a pawn either on g8 or on b1, both of which are impossible.

Realism: 0/5 Also, why is the board bulging up like that?

Probable winner: Who knows? I can’t even tell whether all the pieces are of the same colour or not. 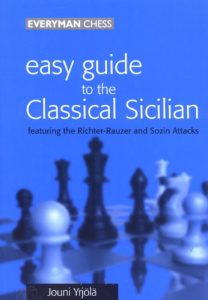 I know that you’re not supposed to judge a book by its cover, but can I judge it by its title? Why is the ‘easy’ not capitalised while the ‘classical’ is? Even if you’re capitalising your nouns German style, the ‘guide’ should haver a capital and the ‘classical’ shouldn’t. Also, is there anyone who actually believes there is an easy way to learn the Richter-Rauzer and the Sozin?

Black has centralised his pieces, with a knight on f5, a bishop on e5, and a king on d5. There is a black pawn on c6 and a white one on d3. How on Earth could something like that possibly occur in a classical Sicilian? White’s queen has gone on a solo adventure on the king’s side, which presumably explains the lack of black pawns there. But there is something even more sinister lurking in the dark. I have the sneaking suspicion that that black bishop there is not, in fact, on the a1-h8 but rather the b8-h2 or a6-f1 diagonal. This would mean that the white pawn in the foreground on the left is on f1 or c8 — but no, I mustn’t think of that; my poor mind couldn’t take it.

Realism: 1/5 At least this position is perhaps not illegal. Perhaps.

Probable winner: Me, because I’m done with this post now.

1. [Which it pretty much shares with the second volume. The colour is a bit different and it obviously says volume 2 instead of volume 1, but those seem to be the only differences.] ↩
2. [I’m pretty sure there should be diaereses on the ‘o’ and the ‘a’ of Yrjola, but should one include those in a reference if the work referenced does not include them? Are there standards for this?] ↩