By: Nikolaas VerhulstPosted on November 19, 2019

Wolfen is a supernatural thriller from 1981, mainly known for starring Albert Finney. The plot starts in a very standard fashion: people are being murdered in New York and when an extremely rich business magnate is killed, former police captain Dewey Wilson is called back out of retirement. The police collect some hairs on the crime scenes which are identified by a zoologist they consult as being wolf hairs. But since when are there wolves in New York? Has this perhaps not been staged somehow? They arrest a member of a suspected terrorism cell. We get a shot of him being interrogated through what is probably supposed to be a one-way mirror1 in front of which is a chess board: 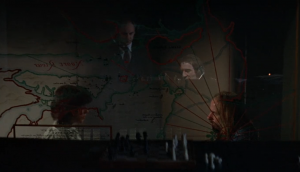 I think they keep the board on hand for when there is a particularly boring interrogation going on. At this moment, they’re investigating a suspected terrorist, and that’s apparently enough to keep their attention, so the board is not in use. Still, there must have been a more pedestrian case in the recent past, because the position on the board is definitely not the starting position. Plus, someone has been doodling on the mirror.

It was not an easy task to reconstruct it and I suspect I failed miserably, but here is my best attempt:2 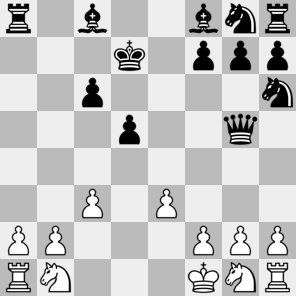 The white forces have been seriously decimated. The queen and bishops have already disappeared and they have taken a pawn with them. In the face of imminent defeat, the white king has cleverly decided to pretend he’s a bishop. So far, this seems to have worked surprisingly well. The black pieces are just lazing about, thinking that their job is over already.

But when they least expect it, a ghostly white king will reappear, gather his scant forces, and murder his black counterpart. Well, maybe not.

Realism: 2/5 While there is nothing illegal about this position, it is extremely unlikely to appear in practice. How black’s b8 knight ended up on h6 is a mystery. Why white’s pieces have not been developed at all is an enigma. What moves the black king to sidestep in front of his bishop is a question science will probably not be able to answer for the next few centuries.

Probable winner: I suspect that white’s ploy will be discovered soon enough and then black will win.

1. [Although, in a certain sense, one-way mirrors don’t exist. It’s mostly about keeping one room dark and one room bright.] ↩
2. [Made by the help of a spiritual diagram editor.] ↩