At the very beginning of Giving the devil her due, a webcomic1 by D. S. Newman and Magaly Abarca, a certain David gets run over by a truck. He dies, but before his death is finalised, he gets to play his traditional game of chess against Azrael, the angel of death.2 In a rare twist on this classical theme, the grim reaper himself promises to serve him for the rest of his life if he manages to win. This is where the real plot twist happens: it turns out that death, despite several centuries of practice against millions of opponents, is not very good at chess and he loses against our protagonist, who turns out to be a sixth grade state champion. At least that’s what he claims, but I don’t believe it. 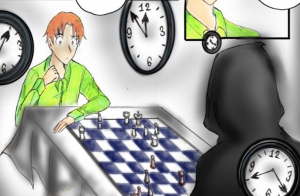 All these clocks are probably supposed to convey a sense of time passing, but I prefer to think that death just keeps clocks around for different time zones to keep his very busy schedule straight. But let’s talk about the elephant in the room: h1 is a black square. Surely, death must have encountered enough very strong players to know that it should be white as should anyone strong enough to be a state champion, even if he is only a sixth grader. Yet here we are. And what’s with those black pawns in the bottom left corner? It certainly looks like they’re on the eighth rank. But it’s not impossible that they’re just standing next to the board, so I’m going to let that one slide.

Let’s have a closer look at the position on the board. Unfortunately, the eighth rank as well as some squares on the black queen’s side are obscured by the Immortal’s coil and, as he seems disinclined to shuffle it off, I have no way to tell whether there are pieces there, although I can say the black king must be hiding there.3 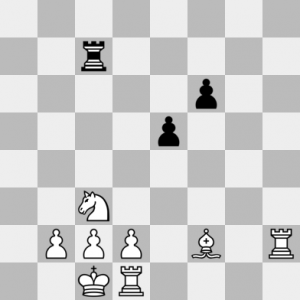 Note that this former state champion apparently has a horrible habit of not centering his pieces well – and Death is just as bad. In particular, the rook I put on h2 might actually be on h3, the bishop on f2 might actually belong on f1, and the rook on c7 could belong on either d7,d6, or c6.

Then another completely unexpected plot-twist happens: it gets worse! There is a very small drawing of white lifting his knight, he gets a very excited look on his face and he announces checkmate. In front of him is a chessboard, with the white king on g1, covered by pawns on h2, g2, and f2!

Still, death accepts his clearly illegitimate defeat. But, as he hasn’t got the time to fulfil his duties, he calls on Lucifer to do him a favour. After a bit of a back and forth (and sideways; they’re with three), Lucifer agrees to come back to Earth and tell David her side of the biblical creation story. Hence the title of the comic.

Realism: 0/5 I could maybe assume that a lot of time passes in the one tiny drawing with the knight and that perhaps the white king could get to g1, but there is simply no way to get the white pawns there.

Probable winner: There’s no ‘probable’ about it: Death lost.

1. [Available here.] ↩
2. [I have always wondered what would happen if you draw such a game. Are you sent to limbo? Or is this what causes comas?] ↩
3. [Giving the diagram editor its due.] ↩