The US military has many detractors all over the world, but none could possibly make them look sillier than they did themselves, from what I understand around 1986, in the commercial we will talk about today. It looks more like a trailer for some upcoming fantasy movie than a commercial for work in a modern military corps. In fact, it reminds me quite a bit of the fabled Maradonia trailers1: there are honest-to-God knights on horseback, an evil queen, flaming swords, and an epic soundtrack — but most of all, it has a chess theme! Everything to lure naive young men into the army, I guess. 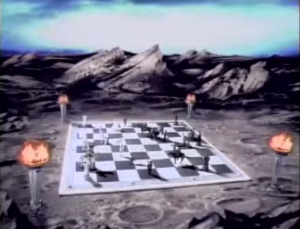 Yes, this is actually a commercial for the marines. Playing chess with human pieces in an old tradition I have written about before but it is usually done on the biggest square in a city or village to attract tourists, not in a remote rocky desert. How did these guys even get here? There’s no road in sight, no cars, no, not so much as a track. Were they parachuted in? But what did they do with their parachutes, then? And how are they planning to leave? And how the fuck did they get the board and those giant torches here? Hell, what about the horses?

Unfortunately, the marines – or rather, whoever they hired to makes this commercial – seem to have been focused on trying to make things look epic and intense rather than well-thought-out and efficient. As a sad consequence, it seems we’re stuck with this:2 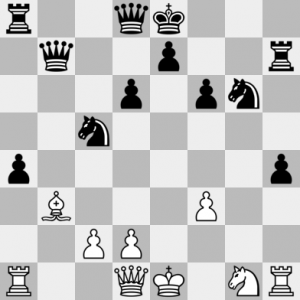 What a horrible mess! Why do the people that come with these positions never move their kings? Why do they refuse to develop? And why do they think promotion is so common?

At this point, the queen from b7 comes swooping in with much aplomb to take the pawn on f3. A legal move, but not one I approve of.3 The queen gets promptly shooed off by the knight from g1. Then e6 is played, I think, followed by perhaps Ne5 and after some unclear but doubtlessly illegal manipulations the black king is forced to bow his head. As if this wasn’t bad enough, a narrator begins in a booming voice:

which sounds like something a weird ethnocentric group would say in order to not say something rather unsavoury they really would like to say.

Realism: 1/5 Like so many military operations, it is technically not illegal, but it is highly unsettling and perhaps should be illegal.

Probable winner: Well, they’re trying to make it seem like white won, but I suspect they’re just trying to hide a rather embarrassing retreat. At best, it was probably a draw.

1. [If you don’t know what that is, please google it! It is spectacular. Also, check out this delightful sporking of the first book in that series.] ↩
2. [If I keep making these weird diagrams, I’m afraid the diagram editor will send the marines after me.] ↩
3. [And, of course,
When someone makes a move
Of which we don’t approve,
Who is it that always intervenes?
U.N. and O.A.S.,
They have their place, I guess,
But first – send the Marines!] ↩