Gravity Falls is a critically acclaimed cartoon show produced by Disney about twelve-year-old twins Mabel and Dipper, who spend the summer holidays with their great-uncle — or gruncle, as they call him — Stan in the eponymous town. This town happens to be a hotspot for all sorts of paranormal and superhuman activities, and of course the siblings have to investigate them all. In the particular episode I will discuss today, the magic MacGuffin du jour is a crystal that makes things bigger if light falls through it in one direction and smaller if it falls through it in the other direction. But before they discover this, the two siblings can be seen playing chess: 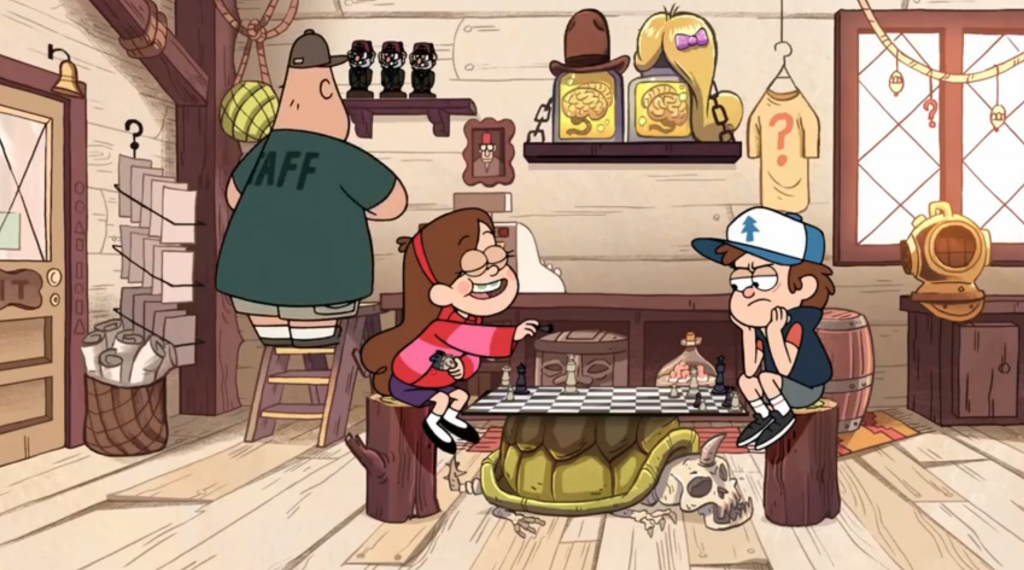 Dipper is more or less the brains of the crew, so naturally — and contrary to what their facial expressions suggest — he is making short shrift of his sister. Like any self-respecting nerd, he keeps score of their matches in a notepad and he seems to be leading by eighty-five to nil.

But in Gravity Falls, not even chess is safe from the paranormal! I don’t mean that their chessboard is precariously balanced on the shell of turtle skeleton with the skull of a human unicorn — it is much worse than that: h1 is a black square and their board is 8 by 10. And that’s only the beginning! It turns out that the position on the board is the following:1 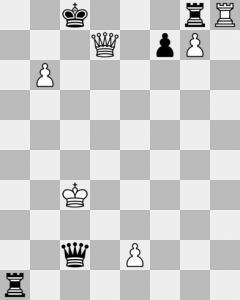 Obviously, this position would be illegal even the board had the right size, but let’s not nitpick too much because, in a moment, there will be a wholesale outbreak of lice.2 It’s Mabel’s move here, and she plays:

and with this clearly nonsensical proclamation, she moves a black pawn to d2.

Dipper: It’s a pawn, that’s not your colour, and stop stealing the tiny horses.

Well, Dipper, if black is not her colour then you are in check on her move, if you call the knights ‘tiny horses’ you probably don’t know shit about chess, and you’re really not going to say anything about ‘black space 9’? In what universe does that even make sense?

In any case, Dipper ignores the fact that his sister’s move is illegal and take a white pawn from somewhere — not b7; that pawn’s still there — and knocks the black king over with it, announcing checkmate. That’s illegal, of course, but that’s not the worst of it: if black is not Mabel’s colour, then it must be Dipper’s, which means that not only did he also play with his opponent’s pieces but he also managed to checkmate himself.

Probable winner: Who knows? Neither player has any clue what they’re talking about. Probably, the real winner is the viewer because, despite the atrocious treatment chess gets, the series is quite good.

1. [When trying to solve mysteries, make sure to take your diagram editor with you.] ↩
2. [Also, there are some nits we already ignored. I strongly suspect, for example, that the first time we see the position, those pawns are on g7 and h7 instead of f7 and g7.] ↩