From what I understand, Saturday night live is pretty much a staple of American culture but largely unknown outside of the USA. It is a late-night show consisting mostly of a bunch of sketches, often inspired by current news, which are strung together by an ever-changing host. It has been running for well over four decades, several of its sketches have been turned into feature movies,1 and it has, at the time of writing, gathered a record 71 Emmy primetime awards. Of course, in such a long history, chess is bound to pop up at some point. And indeed it has, for example in the episode of January 20th, 1996:2 there is a sketch about two doofuses cheerleading for the ‘Midwestern regional chess tournament’, whatever that may be. 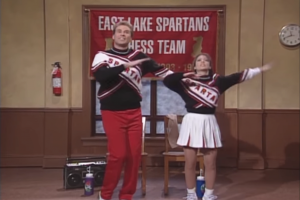 The sketch consists mostly of these two being as inane and goofy as it one would expect from cheerleaders, but there is a short fragment which presents a very zoomed-in view of a chess game being played – and it is precisely this that interests me.

There is an old, analogue clock next to the board. The minute hand is closing in on twelve o’clock, the flag raising with every second, so it is understandable that the players are moving very fast; perhaps it’s a blitz tournament. That the hour hand is on 8 instead of the traditional six is forgivable, since that was — as far as I’m aware — never an official rule.

On to the position! Reconstructing it was quite an experience. The scene starts with a view of the (extended) centre of the board, which looks pretty normal. There are some perfectly commonplace moves from both sides while the camera pans to the right, which is black’s side. The edge of the board is reached. Black finishes his move and the sleeve of his shirt is lifted up, revealing…3 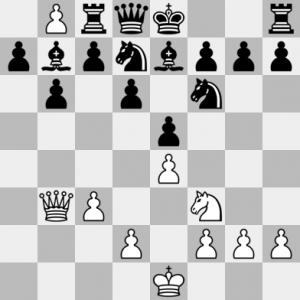 … a sodding white pawn on b8! Actually, the position above is the first one we see. In it, white plays d4, which is answered by exd4, cxd4, o-o and only then do we see that poor pawn, lost behind enemy lines. What kind of monster would send it there?! There is no way it could have gotten there legally, even if there had been a way, it would have changed into another piece the moment it reached b8.

One thing’s for sure: whoever is playing here doesn’t deserve cheering.

Realism: 0/5 As the board was revealed, I was thinking it would be something like a 3/5: all pieces, perhaps with the exception of Rc8, seem to be on very logical places, both players seem to be fighting for the centre, and the moves shown are quite logical. But then there was that stupid pawn.

Probable winner: The next sketch, which must have looked much better than it is after this monstrosity.

1. [Some of them even good, apparently!] ↩
2. [You can find the transcripts here. This is also where I found the exact day this particular sketch aired.] ↩
3. […cheerleading for diagram editors!] ↩