CIPC #151: The spirit of Christmas

By: Nikolaas VerhulstPosted on December 24, 2019

‘t is the season to be jolly! To put a tree with more decoration than Idi Amin in a prominent place in the house. To get together with the family for a hearty meal with too many courses. To watch super schmaltzy Christmas movies about misanthropes growing a heart and finding love after all. Preferably with ghosts. The 2015 made-for-TV movie The spirit of Christmas fits that bill quite nicely: it is about a woman who prioritises her work as a lawyer over relationships, until she has to assess an old house which is haunted. By an old-fashioned, handsome, gentleman ghost. 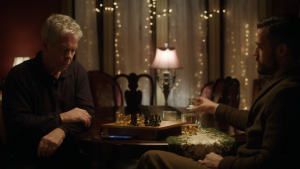 This scene happens when the movie is nearing its climax. Our protagonist is called back to Boston for her job and she will have to choose between Christmas with a handsome ghost or with some stressed-out colleagues at work at work. Just after she left, we are treated to the shot above. The guy on the right is the ghost, who reincarnates as a fully physical human being1 for the twelve days of Christmas. The one on the left is the current (fully alive) manager.

Christmas is coming up and they have no earthly business to attend to, but what ghostly business are they up to? For one, h1 is a white square! Yay! But I’m hesitant to let that get my hopes up. Let’s investigate further…2 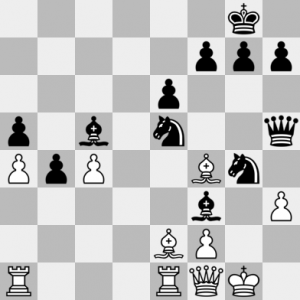 Hey, that doesn’t look to bad! Black is down two exchanges, but he has two pawns, white’s pawn structure is demolished, and, most importantly, black has a devastating attack.

While the players are chatting about things that don’t concern us, the following moves are played:

Here, something weird happens: the dialogue continues normally, but in there is a cut in the game. Apparently, the moves 3. … Qf4+ 4. Bg3 were played by telekinesis and black plays 4. … Ng4+. Shocked by these poltergeist activities, white answers 3. Bxf3 which is illegal. Black now takes the king, which is also illegal.

Ghosts apparently have their own set of rules.

Realism: 4/5 Of course, Bxf3 is an illegal move, but it is not that unlikely that an amateur thinks the game ends when the king is taken and that white, seeing that mate was unavoidable, tried to either quicken the end of trick his opponent into a blunder by an unexpected move.

Probable winner: Black. The only option white had left is protesting that black’s last move was illegal, but then so was his. I expect there would be no penalty on either side and the game would be resumed in the last legal position, meaning white would get mated quickly.

1. [Because ghost effects are expensive.] ↩
2. [As my Christmas present to you all, I give you a link to a diagram editor.] ↩