By now, there are several thousands of games on this site. How is one supposed to find games that are interesting? The answer is that one is not. One can, from now, look at the Best Of Belgian Chess History posts to find some of the more interesting ones. One can even make suggestions to the webmaster. One is very lucky, indeed.

At the end of the eighties, Belgium had a brief chess boom, with the OHRA and SWIFT tournaments in Brussels as well as a decent amount of open tournament, with the one in Ostend being perhaps the most important. By the early nineties, the enthusiasm was dying down but had not gone just yet. In the shadow of the greats, the Flemish players were playing their regular tournaments. For them, the VSF interleague had some importance, because it was a qualification tournament for the Belgian championship.

Schuermans had already been a mainstay of chess in Antwerp for two decades. He had built a reputation as an incredibly dangerous opponent with a firm theoretical knowledge and a penchant for sharp, tactical positions in which he sometimes overwhelmed his opponents in real 19th century style. Amongst his victories are numerous editions of the Antwerp league championship, training matches against Proost and Van Herck, a shared first place in the Ghent open of 1980, and — as a highlight — the title of Belgian champion in 1987.

Why did I choose these games?

The first round of the VSF interleague pitted Schuermans against Lacrosse. It was a game in true romantic style: black sacrificed a piece in the Vienna gambit and, for fifteen moves, pieces were flying everywhere until the following position was reached: 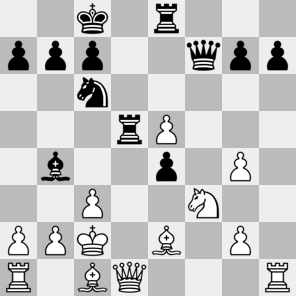 black does not have enough compensation for the piece and there are several winning moves, but Schuermans found the most precise one: 16. e6! A very nice deflection! The point is that if the queen takes the pawn — and there’s no real alternative — the line 17. Bc4 Rxd1 18. BxQ comes with check, leaving white a rook up.

The day after his first round victory, Schuermans had black against De Buck in the second one. True to his style, he played the Fajarowicz gambit and after just ten moves the situation on the board was as follows: 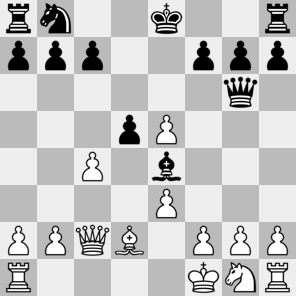 There is a terrible threat on g2 and white’s queen is hanging. Naturally, he tries to get his queen in safety with tempo: 11. Qa4+. Here, Schuermans plays b5! Again the best move on the board, again a deflection of a queen by a pawn sacrificing itself, and again a check is involved! The point is that, if the queen takes on b5, 12. … c6 attacks the queen again — but this time by a protected pawn, thus keeping the queen busy and preventing white from dealing with the threat on g2. Of course, one should calculate what happens after 13. Qb7, but it just works for black.

Deflection is quite rare in practical games and yet here two very similar deflections played by the same player on two consecutive days! That’s more than remarkable, that’s incredible.