Rokade is a book written (in Dutch; the title means Castling) by an MD by the name of Hein Heijnen. It appeared in the prehistoric1 year of 2013 by the publisher Aspekt. It is about a pharmacist, Ewoud van E, who is going slightly mental. Half of the book is dedicated to the dialogues he has with his psychiatrist and the other half to a secret diary he keeps of the things that drive him crazy. So far, it doesn’t sound like something that should appear on my blog, but it it described both on the publisher’s website and the blurb on the back of the book, as a chess novel. Naturally, I was intrigued and started reading. 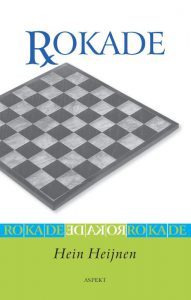 That was a mistake. Apparently, no-one proofread this book. Or if someone did, they were horrible at their job, because this book is absolutely rife with very obvious language mistakes. And not just language mistakes. At one point, Ewoud van E is talking about homeopathic dilutions which don’t contain a single molecule of the dissolved drug. This, he states, occurs with dilutions of 23-10. even though every dog with a hat on — and certainly any trained pharmacist — should know that this should be 10-23.2

But putting all that aside, what about the chess? It is called a chess novel, so there must be some chess, right?

Well, yes. Our protagonist is low-rated member of a chess club and he writes once or twice about games he plays. The most details come in a probably imaginary scene our protagonist describes, but the author carefully avoids giving enough to reconstruct the game. I know it starts with 1. Nc3 Nc6 and I am very tempted to give a low score for realism just based on that, but the book admits that it’s a very rare opening, so I can’t in good conscience do that. Pity.

The protagonist also uses chess as a very weird and rather nonsensical metaphor for the conspiracies he is imagines people are plotting against him. He sees himself as the king and the psychologist he is seeing as the king’s rook; him seeing the psychologist is then compared to castling, putting the psychologist between him and the danger presented by the other pieces. Weirdly, he seems to want protection from his own pieces. So, yes, he really is crazy.

Realism: ?/5 I don’t really know enough about the games to give a reasonable score. The spelling for sure isn’t realistic.

Probable winner: Whoever is playing against Ewoud. He seems to be a mediocre player at best and a hot mess at worst.

1. [By CIPC standards, that is.] ↩
2. [Under the standard assumption that there was 1 mol at the beginning; this is basically just the inverse of the Avogadro constant.] ↩