By: Nikolaas VerhulstPosted on January 14, 2020

Let’s get this new year started for real! Now with some shitty pop music, like last year, not with an obscure publicity photo, like 2018, and certainly not with something as low-brow as a Smurfs comic, like this whole blog started all the way back in the beginning of 2017. No; this year, we’ll start with some proper culture! With some English genre painter you’ve probably never heard of, but who has an impressive collection of honorifics gathered behind his name, like cars in a pile-up. A man with the quintessentially Victorian name of George Goodwin Kilburne. Isn’t that beautiful? The painting isn’t half bad either. But how about the chess? 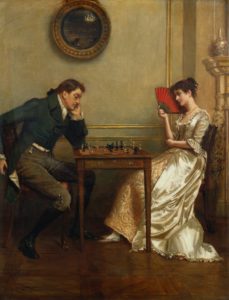 I found this picture on a site called The Atheneum and I am so happy that I did. I love how you have never in your life seen two people so incredibly annoyed at having to play a game. If you enlarge the picture — which I would highly suggest — you will immediately recognise the players’ expressions: the guy on the left clearly realises that his position is utterly hopeless, but struggles on out of a misplaced feeling of pride, while the girl on the right looks at him with the exasperated look of someone waiting for her opponent to finally resign.

And if we take a closer look at the board, we find that this scenario is fully born out. Pieces from the a file might belong on the b file and vice versa, but apart from that I am pretty confident about my reconstruction of the position:1 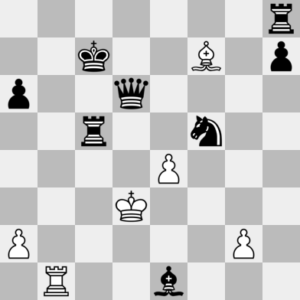 All this makes me wonder how Mr. Kilburne came to paint this so correctly. Did he play? He surely must have known enough about the game to match the position to the players’ expressions. Or did he use models? Is there an actual game this painting was based on? Art historians, do you know this? If not, what have you been wasting your time on?

Realism: 4/5 This is quite a realistic position. Probably, white is just a vastly inferior player who has been dropping pieces left and right. To such an extent, in fact, that black didn’t even feel the need to bring out her h8 rook.

Probable winner: Black. She has a mate in three and it is not hard to spot. In fact, one might even blunder into it without realising it.

1. [You can paint your own picture of the situation here.] ↩
2. [But perhaps he likes old-school British triphop?] ↩
3. [Then again, a mating might be what he was hoping for.] ↩