If you thought we already plumbed the depths of human society last week, here’s a treat for you! Not only do we once again visit the crusty world of advertisement, but this time it’s for sheer tights (or pantyhose, if you prefer the other side of the Atlantic) — also known as the one thing that has less to do with chess than Kias or basketball. From what I understand, the ad below appeared in the March issue of Good Housekeeping in 1989. It is advertisement for the American underwear brand Hanes and features what is presumably a couple (or a couple-to-be, at least) playing chess in a park.1 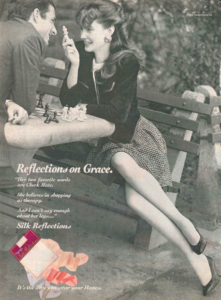 Before we turn our attention to the board, we should probably address the text. ‘Reflections on Grace’ sounds like a highly ethereal theosophical work that takes five hundred pages to not really say anything, but I think that, here, Grace is just the name of the woman on the right. And we get to know her a bit! We are informed, for example, that “her two favorite words are Check Mate”.2

This tells us that she works in an Australian restaurant and likes it when patrons leave. I think the suggestion is supposed to be that she plays chess, but in that case it should obviously be checkmate in one word. Also, what’s with the random capitalisation of check and mate? Plus, it should be “her two favourite words are check and mate”.

Apparently, she also “believes in shopping as therapy”, which doesn’t really tell us anything, and the narrator claims he “can’t say enough about her legs”, which is weird. Why must anything at all be said about her legs? They seems like perfectly serviceable, normal legs.

But let’s get to the meat of the matter.3 As we only see about a quarter of the board, there is little point in giving you a diagram but here goes nothing:4 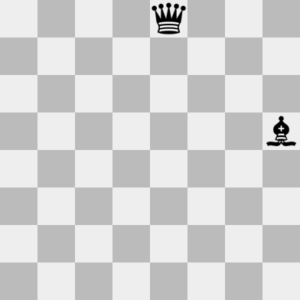 Of course, the bishop and queen might also be on a4 and d1 respectively, but that seems less likely.

Probably, whoever made this add leaned back with a satisfied smirk, thinking “there is no way that idiot with his blog can find something wrong with that” — but, if so, he was severely mistaken! What we see on the board is realistic enough, but Grace is smiling at a white king she holds in her hand. How is this to be explained? The only possibility is that she is actually in the middle of making a move, necessarily as white. This in turn suggests that the queen and bishop actually are on a4 and d1 respectively. That’s minus one point.

Furthermore, who holds up a king by its socle during the execution of a move? And where does the checkmate come in? Is she delivering a checkmate with her king?! On such an empty board, with an enemy queen and bishop marauding about? That’s minus another point.

Probable winner: I suppose Grace is delivering checkmate, but I only have circumstantial evidence.

1. [In fact, I’m pretty sure it is Central Park in New York. How do I know? Well, I recognise the chess table from a previous blog post.] ↩
2. [Should one write [sic] when quoting American English in a British English text? I so, please print out this page, cut out the [sic] above — or that one, if you prefer — and put it into place.] ↩
3. [No, I’m not talking about her legs anymore. Man, I’m not sure I can say enough about them, but I sure as hell can say too much.] ↩
4. [It’s the way you show your games.] ↩