Mozart in the jungle is an Amazon original series based on a book of the same name. It focuses on an New York-based up-and-coming oboist’s struggle to make it in the world of professional orchestra players. The show is overall pretty good, with the main attraction probably being Gael García Bernal who plays the slightly eccentric conductor Rodrigo.1 In the second episode of the series, where our protagonist gets to play fifth oboe in Mahler’s 8th symphony, we see Rodrigo exploring his new home town New York. As part of this exploration he plays chess against a local hustler. 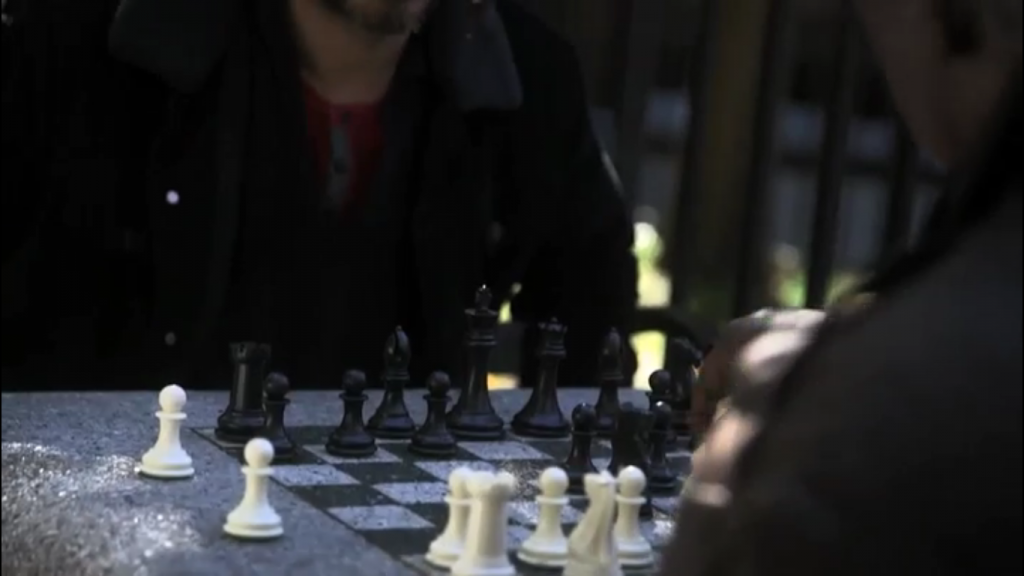 From all the positions I’ve written about, this is the one with the shortest screentime: we see the game for a few seconds only and the board is never in full view. Still, there’s enough to talk about.

To start with, note that there doesn’t seem to be a clock. This is unthinkable for a proper chess hustler: playing fast is their main source of income. Today, our man here is not going to get much dough, though.2 His body is obscuring  much of the king side, but it is still clear that his position is a bit wonky.

Let’s have a closer look at what is my best attempt at a reconstruction:3 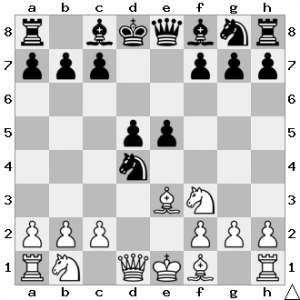 I must admit that I have no real reason to suspect that there’s a white knight on f3 – except, of course, that there usually is. Weirder is that I’m also not sure about the placement of white’s royalty. Did both players switch their kings and queens or did they play reversed royals?4 Or did Rodrigo actually play something like Qe7 Kd8 Qe8? A spine-chilling thought, indeed!

But even if the game was indeed played with reversed royals, I still don’t know how this position arose. Especially the disappearance of white’s e-pawn is alarming. Has anyone seen it? Where did it go? Who took it? How did it get lost?

Realism: 2/5 This position reminds me of an old blogpost of mine: at first glance it seems more or less normal, but then you start thinking about it and it all falls apart.

Probable winner: Rodrigo, I guess, but I’m far form sure.

1. [Who is loosely based on Gustavo Dudamel.]↩
2. [Heh.]↩
3. [The diagram has been orchestrated with this.]↩
4. [I vaguely recall reading somewhere that the great Keres played a tournament like that once. I have no idea where, unfortunately.]↩