I have quite a high tolerance for mediocre mystery fiction – and “mediocre mystery fiction” happens to be a perfect description of the American television series The Mentalist. It’s about Patrick Jane, a former psychic who helps the police as a consultant. His wife and daughter have been killed, but he is played by Simon Baker so that evens out. In episode three of the first season, Red tide, we can spot him – or rather his right hand, like Nessie chomping down on a bishop – playing chess with a surfer dude: 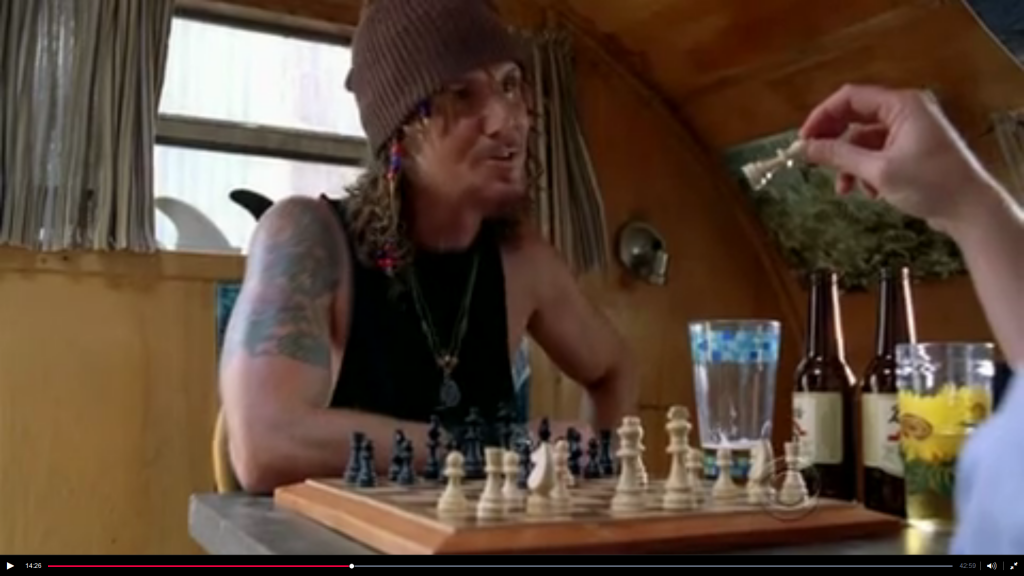 The guy on the left has the nickname flipper1 and is a suspect for the murder of a young girl. The police enter his caravan2 with guns drawn and all tensed up, just to find their target playing chess with Jane who greets them as follows:

Patrick Jane: Hey guys, come in. I’m just about to discredit Nimzkovich’s theory on the French advance once and for all.

This is the sort of provocation that could get you shot. For, you see, that k is not a typo. It is a very clearly pronounced desecration of the name of the Latvian-Danish master Nimzovich and it alone already casts considerable doubt on Jane’s chess skills. My guess is that someone involved in the production spent five minutes on google to come up with some chess talk and a more or less reasonable position. This person, whoever it was, failed. On both accounts.

We have already established that the chess talk makes no sense, but the position fares even worse. There is absolutely no doubt that it is as follows3: 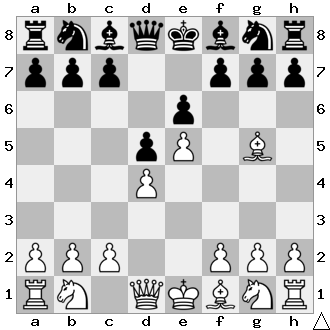 This is many things, but a reasonable position it is not. How did it come about? The advance variation of the French would be 1.e4 e6 2.d4 d5 3.e5, which explains the pawns in the centre, but how did the white bishop get to g5? Maybe flipper was too stoned or drunk to notice white playing the extra move 3bis.Bg5+, but even then, even if black made no third move – a bishop should never throw himself on a lady like this.

Admittedly, the other bishop’s behaviour is even less episcopalian: he prefers the king! In fact, in the position above, white plays another move: 3tris.Bb5+. I have always been told to develop knights before bishops, but I guess that anything goes if you’re a mentalist.

Realism: 2/5 The position is ludicrous, but not obviously so. It might take one a second glance to notice how ridiculous it all is, like Magritte’s L’empire des lumières.

Probable winner: Patrick Jane. He’s already up two tempi, and black’s queen is up for the taking.4

1. [Which would be sufficient reason for becoming a murderer.]↩
2. [Because of course he lives in a caravan.]↩
3. [Diagram once more made with this editor.]↩
4. [But Nimzovich thought 3.e5 an excellent move, so if Jane wants to discredit Nimzovich’s theory about the French advance, maybe he’s planning to lose? Anyway, his opponent is taken away for questioning, so Jane should still win on time.]↩