By: Nikolaas VerhulstPosted on January 24, 2017

“Post mortem” is the slightly macabre but very apt term chess players use for the after-game analysis with one’s opponent, where one looks at the most useless variations and is astonished by one’s own stupidity. So when I encountered the 2002 computer game called “post mortem” I hoped, for just a happy second, that it would be chess themed. Such, alas, is not the case. Instead, it is a murder mystery point-and-click game. You take on the role of Gus MacPherson, a former private eye working as a painter in Paris. He is called back to his former job to investigate the murder of two other Americans. It’s a rather messy affair, with decapitations, blood spatters, ritual murders – all standard stuff. Until you stumble upon the following gruesome scene: 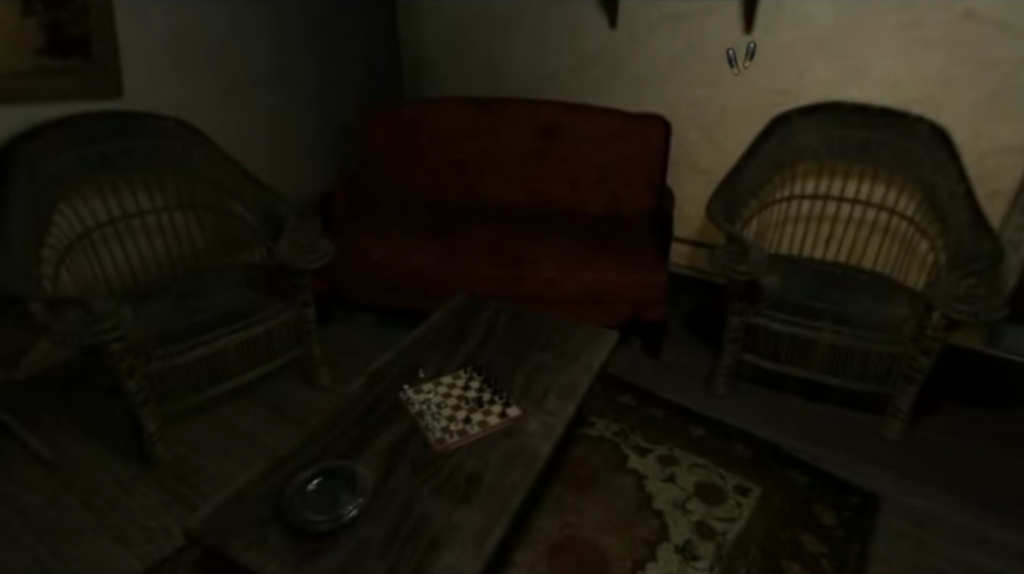 This is blood-curdling! This is ghoulish! Just look at white’s rook! This must be how they play chess in Innsmouth, pushing and pushing with their slithery appendages that poor g-pawn ever further down the board in a hopeless and pointless voyage into the never ending Sarlacc pit of insanity that is white’s king-side.1 Strangely, this queer and unsettling position is entirely ignored by our detective, so we will have to investigate it ourselves.

The first thing to note is that there are no chairs drawn to the table which suggests that the players weren’t physical entities, but rather ethereal beings like the many-angled ones that roam the shadows. The second thing to note is that the inevitable has finally happened: h1 is a black square. This is to the obsessed CIPC-er that I am what the fly agaric must be to a mycologist: it’s commonplace, it’s eye-catching, and it’s the one thing laymen might recognize. Correcting for this error, the position seems to be the following2, although the resolution is quite low and some pieces might be different: 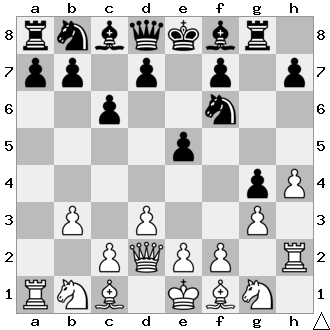 You might think I’d be complaining about white’s kingside position, but I’m not – I have seen many beginning players start with moves like h4 and Rh3, and if a black pawn comes to g4 I could imagine someone retreating his rook to h2. You might think I’d protest against the lack of development, but I won’t – I have done worse myself. No, what I kept wondering about, was the fate of the white a-pawn.Where could it have been taken? Who could have taken it? Why would the capturing piece retreat? My flabber, it was gasted.

I think I have found the solution, though: the pawn wasn’t captured at all, it has escaped! Seeing the dreadful fate that befell its colleagues, it slowly inched its way over the edge of the board. Then it made a run for it! Not caring about knots and splinters in the wood of the table, not fearing the great fall that separated it from the safety of a hiding place under the sofa it ran – until someone entered again and it froze in fear.

Realism: 1/5 This score reflects chess as it is played on this side of the Styx. It is quite possible that in the underworld, where things smell purple, this position is tabiya.

Probable winner: I don’t even know who was playing! Black is a pawn up and normally his chances would be better, but here, I think, the only victors could be Cthulhu, Shub-Niggurath, or Nyarlathotep, the crawling chaos.

1. [We cannot even seek the comfort of blaming marijuana, since the ashtray is empty.]↩
2. [Diagram made with hands trembling in fear and this editor.]↩