Belgium is a strange, strange country. I don’t mean the bizarre borders1 , the incredibly complicated politics2 , or the fact that there’s a Belgian chess history site. No, I mean the fact that Belgium’s most famous inhabitants are all fictional.3 What Belgians are reasonably well-known internationally? Tintin maybe? Or the smurfs? Lucky Luke? Dr. Evil? Or our protagonist for today: Hercule Poirot, probably the most famous detective since Sherlock Holmes. He stars in an astonishing amount of books, some films, radio dramas, and our topic of today: a long lasting television series. In episode six of season five, Poirot returns to Belgium. About halfway through the episode, we get to see one of the rarest sights nature has to offer: people playing chess in Belgium. 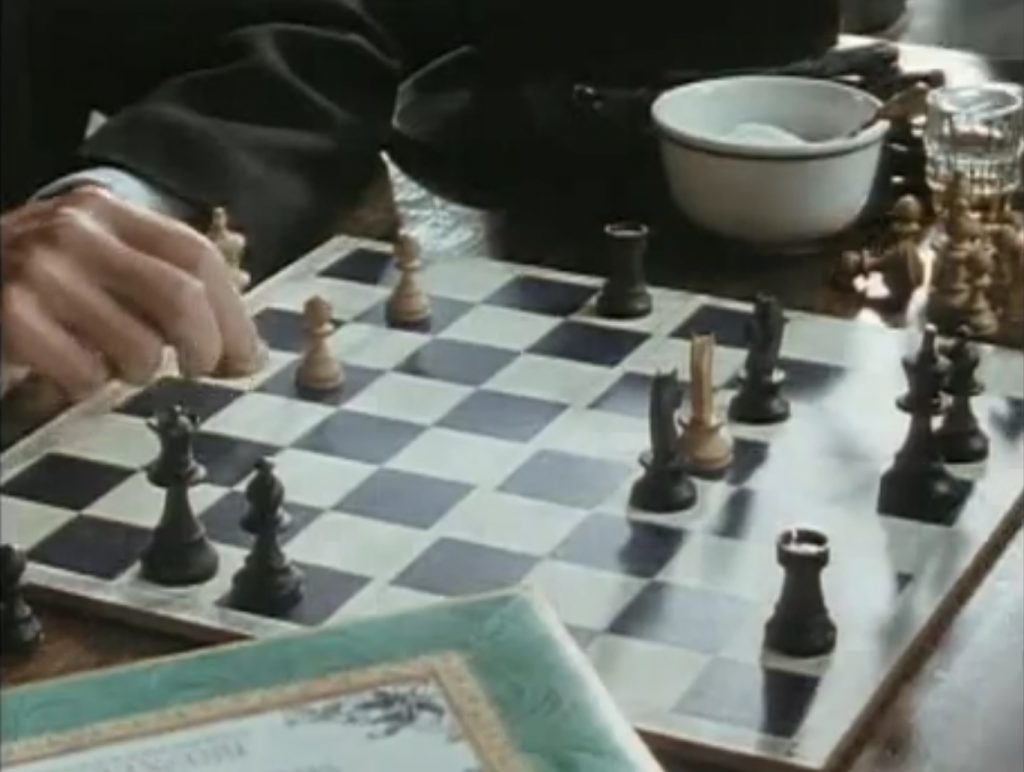 Poirot can be seen playing a few times during the series. This is probably because Poirot is supposed to be quite smart and chess is for smart people, right? Right? Alas, no, it is but an old misconception like the earth being flat or The catcher in the rye being a good book; chess skills are probably distributed quite evenly among smart and stupid people.

From what scant material we have, it is hard to decide whether Poirot is a good player or not. He wins this game, but he takes over from an unnamed woman in a position which is already won. Besides, his opponent seems to have lost his job as a game warden when the dinosaurs went extinct. Bref, he’s ancient – and chess is a young man’s game. On the other hand, our hero doesn’t seem to be using his famous little grey cells to their full potential: he barely looks at the board and plays pretty much a tempo. One is surprised he doesn’t checkmate his opponent by accident.

But the position, it is most curious eh. Here it is:4 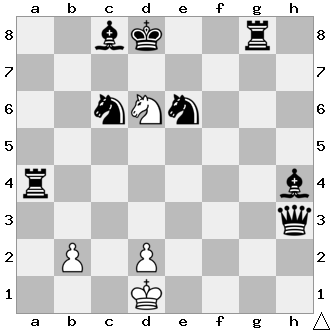 The white pieces are led by François, who is some kind of butler.5 Poirot, or rather his great predecessor, has managed to win two rooks, a queen, two bishops and a knight for which white has the meagre compensation of two scraggly pawns, still at home base.

At first glance it seems a highly unlikely position. After all, with such an enormous material advantage black could surely have checkmated his opponent before! In fact, after white’s move Ke2, Poirot misses a very easy mate in two. There is a good reason for this, though: the interview has to last long enough for him to get the information he needs. But why did the anonymous woman drag out the game? I think the answer might be that François’ company was, let’s say, rather appreciated by his original opponent. Lucky, lucky chap!

Realism: 3/5 This is a position that could reasonably occur if white was a much weaker player than black. It does lost a point, though, because the white d-pawn hasn’t moved.

Probable winner: I don’t think probable is the suitable word, seeing that Poirot checkmated his opponent.

1. [Baarle-Nassau is the most famous example, but there’s also the Vennbahn, a recent border modification and so on.]↩
2. [I can’t make head nor tails of it. If you want to give it a go, be my guest.]↩
3. [There’s Jean-Claude Van Damme, but he’s almost fictional.]↩
4. [Clearly, the diagram, it is made with this editor.]↩
5. [Not quite a Gerard Butler, though.]↩