Oh frabjous day! Callooh! Callay! I got my first suggestion! That’s an important moment in the life of a young blog. So exciting! Less exciting is the fact that it’s about a pop song. A pop song.1 That’s about the last place where I would expect a chess reference. It happens in a song with the pseudo-profound title it’s not war (just the end of love) by a band called manic street preachers2 . It’s a rather sordid affair, really. The text is filled with irritating half rhymes, utterly devoid of both meaning and meter, and the music is in a rather standard song form with stereotypical orchestration. The music video is more interesting. Even though the song is quite recent, it very much breathes a cold war atmosphere. Just look at this still shot:

The slightly grainy film, the Soviet flag, the well-nigh antique Gardé clock, and the manual demonstration board in the background are all very seventies and immediately remind one of the Spassky-Fischer match.3 There are, of course, a few suspicious things. For example, we seem to have a match of some importance here – there are quite a few spectators, apparently no less than three tournament officials, a film crowd – but black is playing under the Welsh flag! A Welsh chess player in an important match?! Whoever heard of such a thing? The Welsh are supposed to be the one people in Europe even less inclined to chess than the Belgians!

Another oddity is the fact that the position on the board, which is as follows4 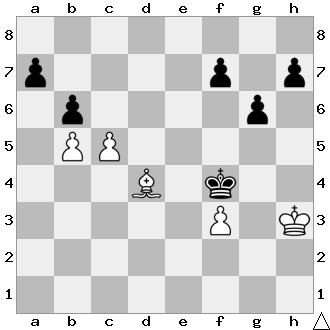 In the end black follows this suggestion and does in fact take the pawn. White answers by recapturing with his bishop. Black starts pondering over his next move. Apparently, this takes too long for white, who drags him on the board and kisses him passionately. This, however, is a clear case of ‘distracting or annoying’ one’s opponent which is expressly forbidden by article 11.5 of the official FIDÉ handbook of chess.

Realism: 4/5 I have not been able to find an actual game this position occurred in, but it’s highly plausible. Two pawns for a piece it just barely enough compensation to keep a smattering of hope alive and to keep black playing.

Probable winner: White’s position is completely winning, but she might get penalised for her transgressions – and possibly even lose the game.

1. [Okay, maybe it’s a rock song. Or a grunge song. A crunk song maybe. Look, I don’t know much about this.]↩
2. [Although I doubt any actual preachers are involved.]↩
3. [The scene might also be inspired by the BBC master game, a televised series of chess tournaments which ran for seven series in the seventies and early eighties.]↩
4. [Made yadda yadda yadda editor.]↩