Today we’re going to do something a bit more obscure. So obscure, in fact, that the moniker ‘popular culture’ can barely be justified. Yes, today we leave the burning bright spotlights of hit TV-series and the booming, amped-up volume of big rock concerts to dive into the foreboding depths of long forgotten comic books series. Today, we bid farewell to glamour and fortune. Today, we deal with Klont. Yes, Klont. It is a comic series which ran for a short while in Flemish comic magazine Robbedoes, didn’t get picked up, and disappeared like a raindrop in the ocean of Belgium’s gigantic comic scene.1 The comic is centred on the adventures of a bearded college-age guy. In our episode of today, which comes from Robbedoes‘ 33th issue of 1980, we find him in a lesson about electronics. 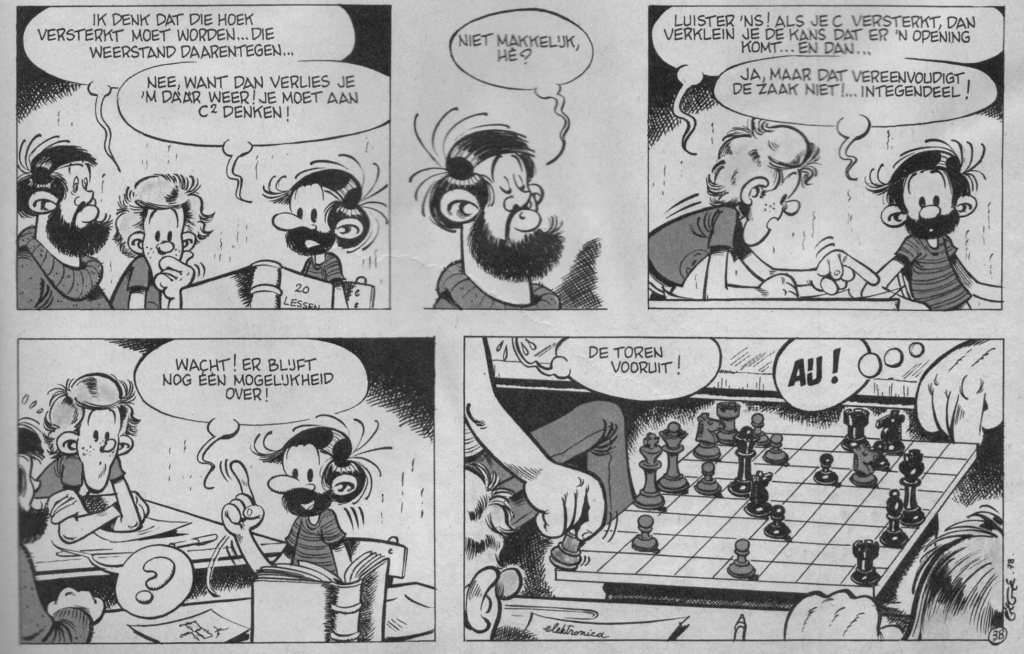 The guy on the right is our protagonist. The narrow-faced chap and the one with a horse brush tied to his chin are two of his class mates. Their professor has given them some exercise about resistances and circuits and so on. Here is their conversation:2

Narrow face: I think that corner should be fortified. That resistance on the other hand…
Protagonist: No, because then you lose it there again. You have to keep c2 in mind.
Horse brush: Not easy, huh?
Narrow face: Listen! If you fortify c, you decrease the chance of an opening, and then…
Protagonist: Yes, but that doesn’t simplify the situation! On the contrary!
Protagonist: Wait! There remains one possibility!
Protagonist: Forwards with the rook!

The humour is supposed to derive, of course, from the contrast between the expectation of students zealously working on an exercise and the revealed truth of said students goofing off with a chessboard. Unfortunately, this fails to be surprising for anyone with teaching experience.

Much more surprising is the fact that they are playing on a uni-coloured chess board. This does avoid the classical mistake of making h1 a black square of course, but does not improve the realism of the situation – and it could use some improving. Desperately. Let’s have a look:3 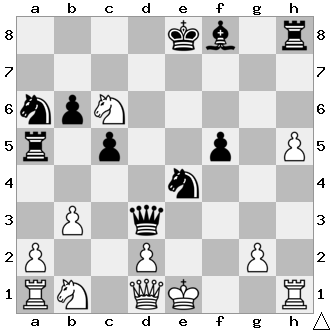 Once more an extraordinary amount of pawns has disappeared and some pieces are very weirdly placed. How, for example, did white get his knight on c6? Why did he delay the development of his other knight? Why, oh why, did black put his rook on a5?

The strangest thing is that, even though the position is outlandish and the chess talk makes little sense, white is about to make the right move – assuming, of course, that he’s about to play Rh3. He will still be having a bad time, though. Sure, he can win an exchange on a5, but he’s a bishop down and his queen-side is terribly underdeveloped. And he’s quite likely to fail the course – that’d teach him to butcher the Réti like that.

Realism: 1/5 There is no reasonable way this position could have arisen. Even an unreasonable one is hard to find.

Probable winner: Horse brush guy has bagged a piece, but both players seem to be quite weak, so everything could happen.

1. [In fact, Belgium has the most comic artists per capita! At least, according to wikipedia.]↩
2. [Very freely translated by your servant.]↩
3. [Made with the usual editor .]↩