Previously, I called The mentalist a mediocre mystery fiction show. By these standards, Numb3rs is dreadful. First of all, the show has given in to 1337 speak. This is bad. Secondly, there is no Simon Baker. This is unforgivable. The show is about a brilliant young mathematician who helps his detective brother solving cases with maths.1 In fact, Numb3rs might also be a contender for a hypothetical Maths in popular culture blog, but there will be enough to talk about if we restrict ourselves to chess. First we will dissect a chess scene from episode nine of the first season. We see the protagonist’s father, Alan, playing chess with a friend, who also helps the FBI. 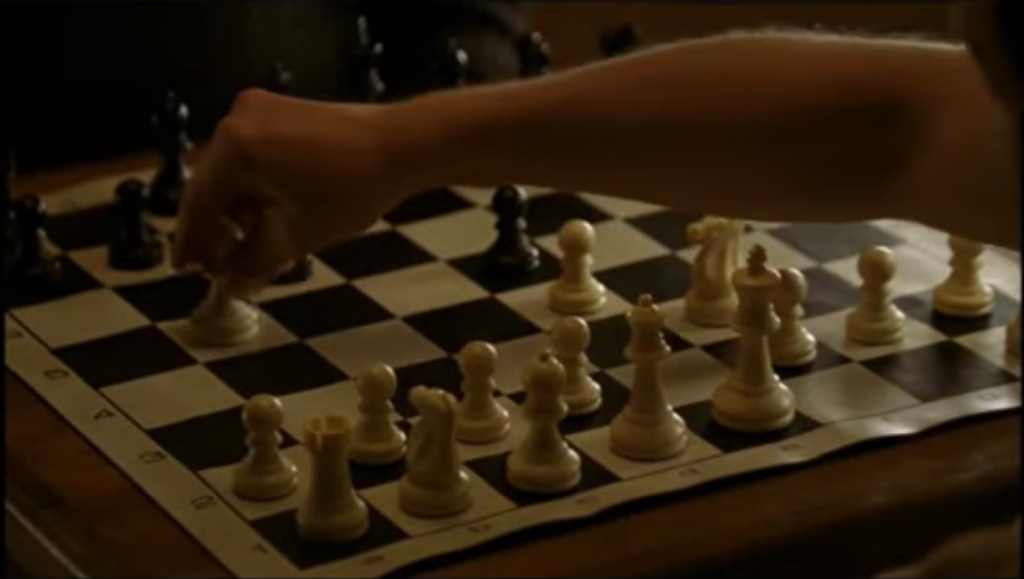 We are then treated to the following snippet of dialogue:

Alan: Ah! The Ruy Lopez opening! I see I’m dealing with a classicist here.
Larry: Look, I warned you I was a little rusty. My game is also a little undeveloped.

Okay, this is not too bad. The Ruy Lopez is indeed a classical opening, and after only three moves it must be admitted that white’s game is still a little undeveloped. Unbelievable! Chess talk that makes sense? On a mainstream television series?! For a moment I felt the foundations of my worldview tremble, but then the show continued and the universe made sense again.

It starts with Alan playing 3….f6. This is the Nuremberg variation and is enough to get one on trial for crimes against Caissa. Then there is a cut to the same scene.2 It is not entirely clear which moves are played during this cut, but it seems like the position afterwards might be the following:3 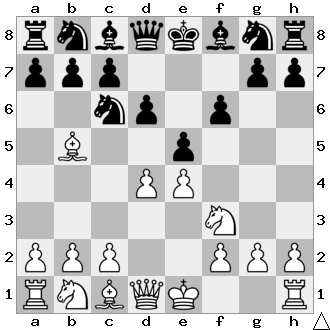 There is a sideview of the board which seems to corroborate this, but it’s from too far away to be completely sure of what’s happening on the king’s side. The queen’s side, however, is doubtlessly correct and it is also clear that the white king is still on its starting square and that the knight is on f3. In the above position black plays Bg4 and triumphantly declares

Alan: By the way, you are now in check.

Lies! Foolish lies! It’s not even close to check! How could a white squared bishop give check to a king on a black square? Hell, it’s not even an attack on the queen! There is an even bigger problem: clearly, this position was reached by the moves 1. e4 e5 2. Nf3 Nc6 3. Bb5 f6 4. d4 d6. As I said, there is some doubt about the king’s side position, but white has no reasonable moves there, which means that it’s not even black’s move! What’s with tv-series’ protagonists playing out of time?

Realism: 2/5 It started quite promising. Even 3….f6 is a plausible move, albeit a rather bad one. But then they had to go and claim 5…. Bg4 was check. Grumpf.

Probable winner: Larry has the advantage, but since neither player can recognize a check, they might not notice checkmate.

1. […and who knows every bit of maths ever. It’s one of the most annoying things about the show.]↩
2. [Which, I guess, is a crime to whoever the muse of film might be.]↩
3. [Made with a better editor than the one used for the show.]↩