Ah, the Smurfs! The little blue guys don’t need an introduction, I think, but I will give them one anyway. Here goes: the smurfs were, according to wikipedia, introduced by Peyo in Johan and Peewit in 1958 and got their own series the year after. Since then, they have become what is perhaps Belgium’s most famous export product.1 Here, the smurfs are in the middle of a game of chess with live pieces. 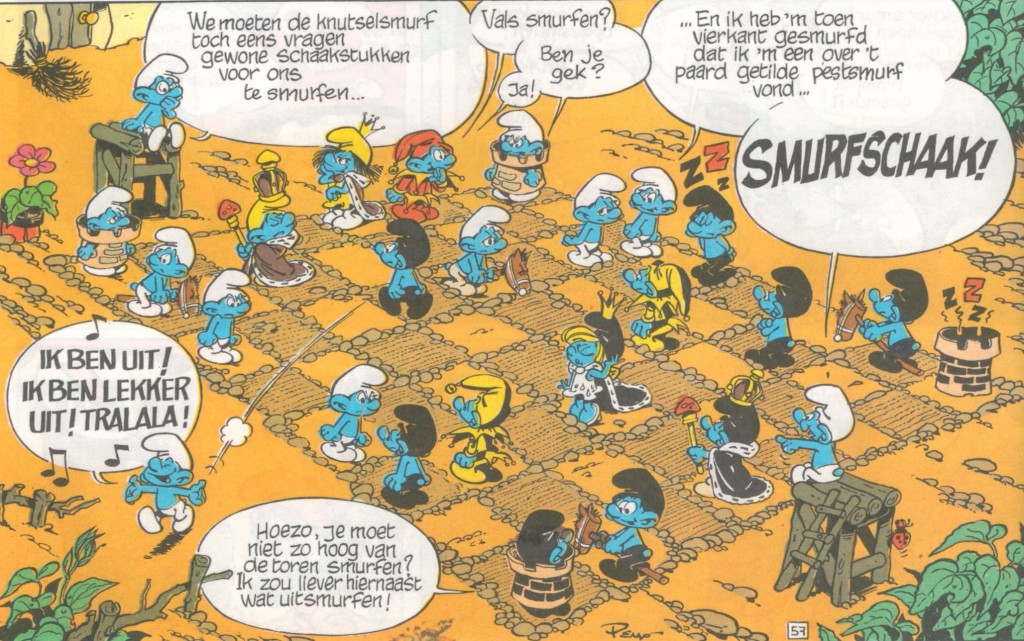 This picture was taken from the Dutch edition of The Smurf Soup (originally La Soupe aux Schtroumpfs), volume ten of the comic book series. In the centre top, one can see the remains of a joke which did not survive translation. The dialogue is more or less as follows1 :

In the original French, this would have had the distinct advantage of being slightly funny, thanks to the fact that fou means both ‘crazy’ and ‘bishop’. We can thank the French revolution for this joke!

The white king seems to be very into his role, but the general boredom among the other pieces is quite clear. In fact, two have already fallen asleep and quite a few more are about to doze off as well. The overt joy of the recently taken e3 pawn speaks volumes, too. There is good news for the poor pieces, though: brainy smurf’s position is crumbling and the game will probably be over soon. This is one of the rare instances of a game of chess in popular culture where we have a clear view of the whole board3 , so let’s have a closer look4 : 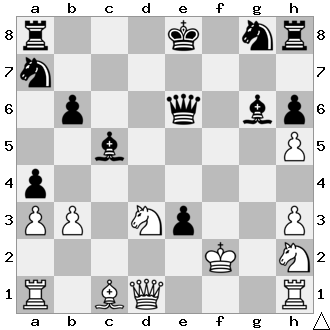 Black’s last move was capturing a white pawn on e3, probably by playing dxe3+. The white king has already lost the right to castle. His pawns have deserted him en masse and must be out of frame somewhere, eating sarsaparilla. On top of that, brainy smurf has lost a bishop while no less than four of his pieces are still (again?) on their home squares and his knight is not exactly flourishing on h2. It must be admitted that black, too, is probably a rather weak player: how on earth did he manage to bury his knight on a7?!

Realism: 1/5 The position is not impossible, but damn hard to reach, even accounting for weak play. What the hell happened to the pawns?

Probable winner: Brainy smurf’s anonymous opponent. My engine gives something between -5 and -6, and white hasn’t got the faintest glimmer of counterplay.

1. [Except, of course, for the word gas.]↩
2. [Very freely translated by your servant.]↩
3. [Which is not at all why I choose this for my first post. The very thought is preposterous!]↩
4. [Diagram made with this editor.]↩