By: Nikolaas VerhulstPosted on February 4, 2020

Pretty woman, a 1990 film starring Richard Gere as Edward Lewis and Julia Roberts as Vivian Ward, must be the epitome of the romantic comedy. Roberts got an Oscar nomination for her role and there were a bunch of nominations for Golden Globes, BAFTAs, and the like — but that is not the point of the movie. The point is that it is a wish fulfilment fantasy aimed at particularly stereotypical women. The story, if you can call it that, is rudimentary at best: billionaire needs arm candy, picks up random hooker, they fall in love, the end. But the rest is taken good care of: Edward1 is rich, handsome, strong, gentle, takes his girl shopping, to the opera, and is completely in love with her — plus he plays the piano! Vivian, on the other hand, has no discernible qualities, except being pretty and a woman. 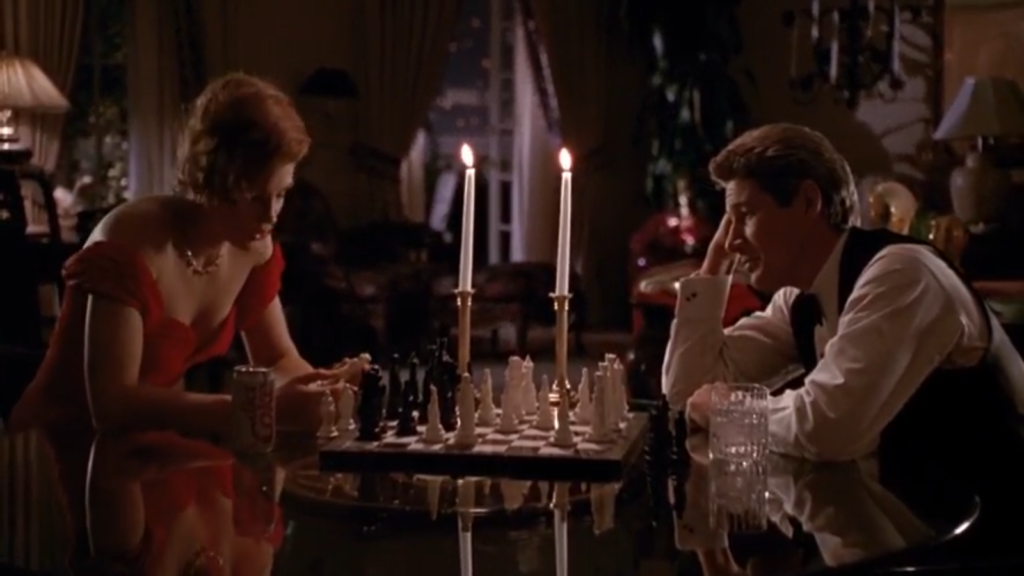 This scene takes place in the penthouse of one of Hollywood’s fanciest hotels after Edward has taken Vivian with his private jet to San Francisco in order to see La Traviata.2 Somewhere along the way, they apparently picked up a can of diet coke. They also must have started a game in the limousine bringing them from the airport to their hotel and then brought the board up with them, because there is already dialogue about “moving the queen” before they’ve gotten out of the car.

But this kind of dubious cinematographic decision need not bother us; we’re here for the chess. We get a reasonably clear view of the board, but the reconstruction of the position is made considerably harder by the very non-standard pieces they’re using. I think this diagram:3 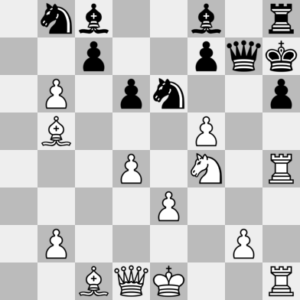 is broadly speaking correct, but some details about black’s kingside might be wrong.

Now, at first glance, one might think that this is the sort of position that could, perhaps, arise in a game between a decent and a terrible player, but a second look belies this impression. What could possibly have brought the white rook to h4? Why was white bringing his knight to f4 instead of taking the black one on e6? How did the black king wander all the way to h7 without perishing in the attempt? How did a white pawn end up on b6 and not take on c7?

Apparently, a handsome young billionaire falling in love with a random prostitute is not the most unrealistic thing about this movie.

Realism: 2/5 The position is not illegal and a few pieces are on their starting squares, which is quite normal. Everything else is highly suspicious.

Probable winner: Edward. He’s up an exchange and a couple of pawns and he seems to be the head of the operation anyway.

1. [Yes, fifteen years before Twilight. Could this have been an inspiration for Meyer?] ↩
2. [Which is very symbolic. La Traviata is also about a prostitute in love.] ↩
3. [Pretty diagram.] ↩