By: Nikolaas VerhulstPosted on February 11, 2020

Tales of tomorrow is a sci-fi anthology show that aired in the beginning of the fifties in the USA. It doesn’t seem to be very well-remembered now, but it starred some big names, like Lon Cheney Jr and Boris Karloff, as well as the then still young Paul Newman and Leslie Nielsen. In no more than two seasons, a total of eighty-five episodes of about half an hour each were shown. Our subject for today is the second one. Its plot is very much a product of its time: somewhere in the Arctic,1 a scientist called Everson is working on Bismuth fission.2 The hope is that it will give humanity access to readily available, cheap energy, but there is a small chance that it will blow up the entire Earth. Presumably, this would make any expected value computation yield something hugely negative, but this does not deter our man.

The scene above occurs near the end of the episode. All different kinds of sane scientists are desperately trying to contact their unhinged colleague and convince him there was a serious mistake in his calculations and the chance of disaster is of by an order of magnitude. The very worried woman on the right is in the middle of a game of chess with her rather more phlegmatic grandfather.

Note that, for some reason, they decided to sit at an acute angle instead of the usual π radians. This is one of those tropes that are super common in movies and tv-series but that never, ever happen in real life, and I am quite annoyed by it, but I will not subtract points for that. Will I subtract points for the position?3 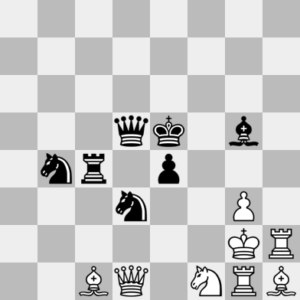 Why yes, I think I will! Why have white’s kingside pieces been cyclically permuted? Why is his rook on h2? Why is his dark-squared bishop still in his episcopal residence on c1? Also, it seems like some pawn must have been experimenting with Bismuth fission, too, because there has been an absolute massacre among them.

The woman just got a phone that people are having difficulty contacting Everson and is besides herself with fear and tribulation. Highly distressed, she quickly relays this information to her grandfather who has even more calamitous news:

Gramps: It’s your move and I suspect you’re going to lose at least a bishop.

He is probably referring to the fact that the bishop on c1 is hanging and that Bxg5 looks very dangerous in view of e3+ Kh3 Nf2+ winning the queen. However, white has so much material that she can probably just take the loss and still be better. If she is too scared of that, she could pin her opponent’s bishop with Rh5 while simultaneously vacating a square for her king.

The only thing that could seriously hamper her, is a blunder.

Realism: 2/5 It could happen, I guess, as the result of some strange, humanity-endangering experiment.

Probable winner: That depends on just how much the news will make white nervous. If she can keep it together, she has every chance to come out on top. Unless the experiment really goes bad.

1. [That’s exactly what the episode says. Presumably, bismuth fission works better at low temperatures.] ↩
2. [Which is an actual things that was the subject of recent research at the time.] ↩
3. [For diagrams of tomorrow.] ↩