By: Nikolaas VerhulstPosted on February 18, 2020

More than one hundred posts ago, I talked about dixit, a popular card game featuring a bunch of highly surrealistic but beautifully drawn cards, on one of which a chess scene was depicted. Today’s subject, Mysterium, is a cross between that game and Cluedo. The story is that, thirty years after a murder, six mediums have come together to try and solve it. To do so, they organise a seance and contact the ghost of the victim. One of the players takes the role of ghost and tries to point the mediums to the correct answer by giving them visions. These visions come in the form of beautifully drawn cards like the one below.1 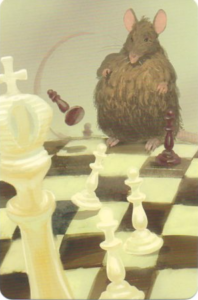 These cards, like the ones in dixit, have a strong tendency to be somewhat surrealistic, so it shouldn’t be a surprise that there’s a very plump rat sitting on a chessboard, sweeping away a black pawn with its tail. Its extraordinarily long tail. So long, in fact, that I’m wondering whether this animal is perhaps not a mouse. But surely it’s too big for that, right? Maybe it’s something in between. At the moment, wikipedia lists dozens and dozens of species in the genus rattus. One of them is bound to look like the one in the picture.

But let’s not get distracted by zoology — there is chess to be discussed! Unfortunately, we only see part of the board and it’s not even clear which part it is. Judging from white’s pawn skeleton, I’m guessing that the first rank is somewhere to the left. The first squares in view must then be either on the second or fourth rank. Assuming the latter in view of the otherwise extremely advanced position of black’s a-pawn, we conclude that the position, or at least the verifiable part of it, is this one:2 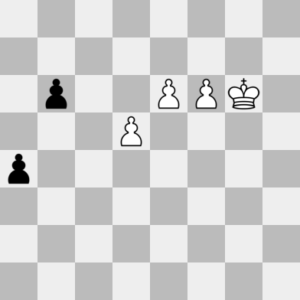 Of course, there must be more pieces, but what we see here looks reasonably, well, reasonable. We seem to be in an endgame, where white’s king has given up trying to stop the black a-pawn and is instead supporting his own forces’ push for promotion. Probably, the black king is on e8 or f8 where he has been slowing the enemies’ progress. If there are other pieces on the board, and that’s far from obvious, they are probably rooks roaming around somewhere on the lower ranks.

But of course, this is just a vision sent by a disturbed spirit to a small circle of clairvoyants to solve its own murder, so perhaps there are no rooks but just a giant, purple banana laughing, laughing at its own existence as a prop to amuse the freshly cut off head of a criminal sentenced to the guillotine in nineteenth-century France.

Realism: 4/5 It seems kind of pointless to talk about realism in a game about six mediums trying to solve a twenty-year-old cold case, but there really doesn’t seem to be much wrong with it. I can’t give perfect marks, though, as we don’t see the whole board.

Probable winner: We have little to go on, but white seems to have the better chances in the diagrammed position. The rat might spoil everything, though.

1. [The illustrations are due to Igor Burlakov and Xavier Collette. Hats off to them!] ↩
2. [If you want to send great visions of chess diagrams, this might be your best bet.] ↩