It it little wonder that I discuss many television series on this blog, it is perfectly normal that I often scrutinise comic books, and that the occasional movie finds itself in my crosshairs will also surprise no-one. But every now and then there is something different, something strange and unexpected. There might be a chess position in a medieval engraving, for example, or on the cover of a book. Or in a card game. Dixit, Spiel des Jahres of 2010, is not only a great deal of fun to play, but also to look at. Consider for example the following (part of a) card:1 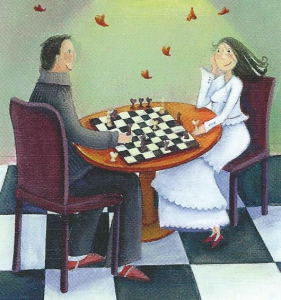 There is no plot I can protest against,2 there is no context I can complain about,3 there is only this one picture – but I’ll find some reason to moan. How is it possible, for example, that so many leaves are falling when there’s no tree around? What’s with the shape of these leaves? And why aren’t the players looking at the board?4 Bah! Humbug!

Worse than that: they’re playing with some kind of fancy pieces again which, together with the fact that the drawing is not very detailed, makes it almost impossible to identify the position. I’m quite confident that the pawns are these weird two-pronged contraptions, since there are three black specimens standing next to one another on the side of the board, but identifying the other pieces is no more than educated guesswork. Here is my best attempt at a reconstruction:5 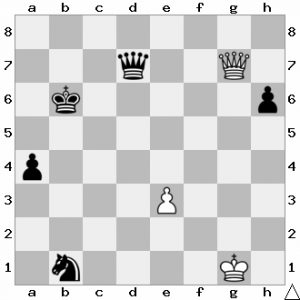 Note that, unlike most chessboards, the one on the card doesn’t have a border. Consequently, it has no coordinates written on it, and therefore I cannot be sure that the person on the left is indeed playing black. If he is not, then that means the board should be rotated 180°.6 In this case, we can conclude that white has been caught red-handed capturing the black queen. But I think we can safely assume that this hypothetical is no more than that: the colour of the players’ clothes is strong circumstantial evidence for the claim that the one on the left is playing black. He’s probably about to play Qxg7+.

Or possibly Qd1+, to prolong his time with an unusually charming opponent.

Realism: 3/5 This seems like a very plausible end to a game between weak players. Obviously, white should have seen the loss of her queen coming – but that’s what you get if you don’t look at the board. Humpf.

Probable winner: Black. He has won a queen or, depending on the royalty status of his opponent, even two.