Today’s victim, Columbo, is an American detective series from the seventies. It is one of the more interesting examples of the genre. One of the idiosyncrasies of the show is that the murder is shown at the very beginning, in full detail, including the murderer’s identity. This makes keeping up the tension a bit harder, but generally it works out pretty well.1 The other peculiarity of the show is lieutenant Columbo himself. He is not the self-confident type, like Jane from The Mentalist or DCI Barnaby from Midsomer Murders, which makes sense since he is apparently based on Chesterton’s Father Brown.2 But enough talking, let’s see some chess! 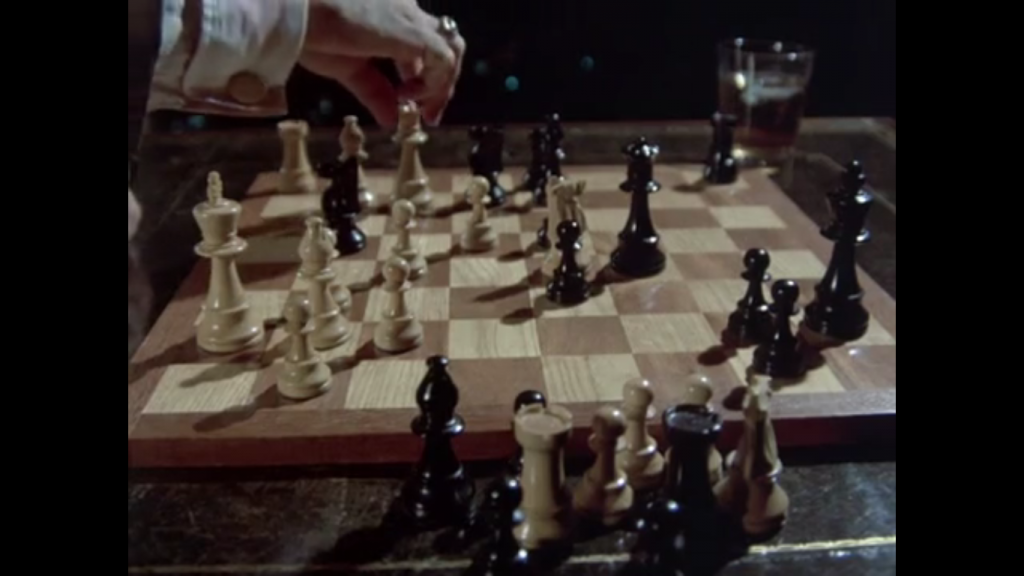 This episode centres on chess champion Clayton, who is so good that no active player can keep up with him. The old champion Dudek is brought back from retirement in order to offer some opposition. The episode starts at the eve of the match and Dudek – who, I think, is loosely based on the great Lasker – gets offed before it can start, so we don’t get to see much chess. Luckily, the two meet up the evening before the murder and play a casual game, so at least we get something.

The result is the above position which I have reproduced and included for your delectation:3 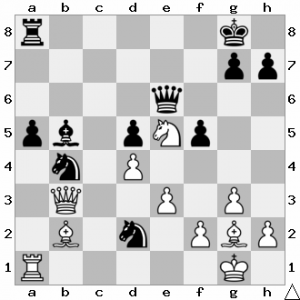 Oh, what a relief! What a breath of fresh air! After the monstrously deformed pieces, the illegal positions, and the wrongly set up boards from the last, oh, 25 or so episodes, we finally get a decent position with decent pieces on a decent board. Dudek is playing white and is to move. I’ll retire to the ceiling for a moment and give him the floor:

…oh my God, that actually makes sense!4 In fact, it’s a moderately pretty combination which is not completely trivial! I never thought I’d live to see this day, but it has finally happened.

I’m slightly curious now as to why this series succeeded were all others have failed. Did they have a chess player in the crew? Or is it simply that, just after the Spassky-Fischer match, chess education was higher?

Realism 5/5: I would not be very surprised if I saw this position in a modern top tournament.

Probale winner: Dudek, but it’s not just probable: we know he won.

1. [It helps, of course, when someone like Steven Spielberg is directing.]↩
2. [Quoth wikipedia.]↩
3. [Made with the diagram editor at hand.]↩
4. [Except for the first otherwise; black could save his bishop. It would still cost him his knight, so two pieces down would still be true.]↩