As you might already have deduced from this site and its title, I have a slight interest in history. Yet in this blog, I haven’t gotten further than the seventies. Impermissible! Unfortunately, one hundred years ago, movies and television series were comparatively rare and the chances of finding a computer game from Victorian times seem quite slim. What to do, what to do? Well, there are still the graphic arts, of course – and chess features heavily in those. Take the following image, for example. It1 is quoted as being called checkmate the king and is claimed to be from around 1475. It shows an engraving of some king or other playing chess against death. Some online sources attribute it to Israhel Van Meckehem, but from what I understand his name is more or less the default for engravings of this time. (I must admit, though, that I don’t understand a whole lot.) 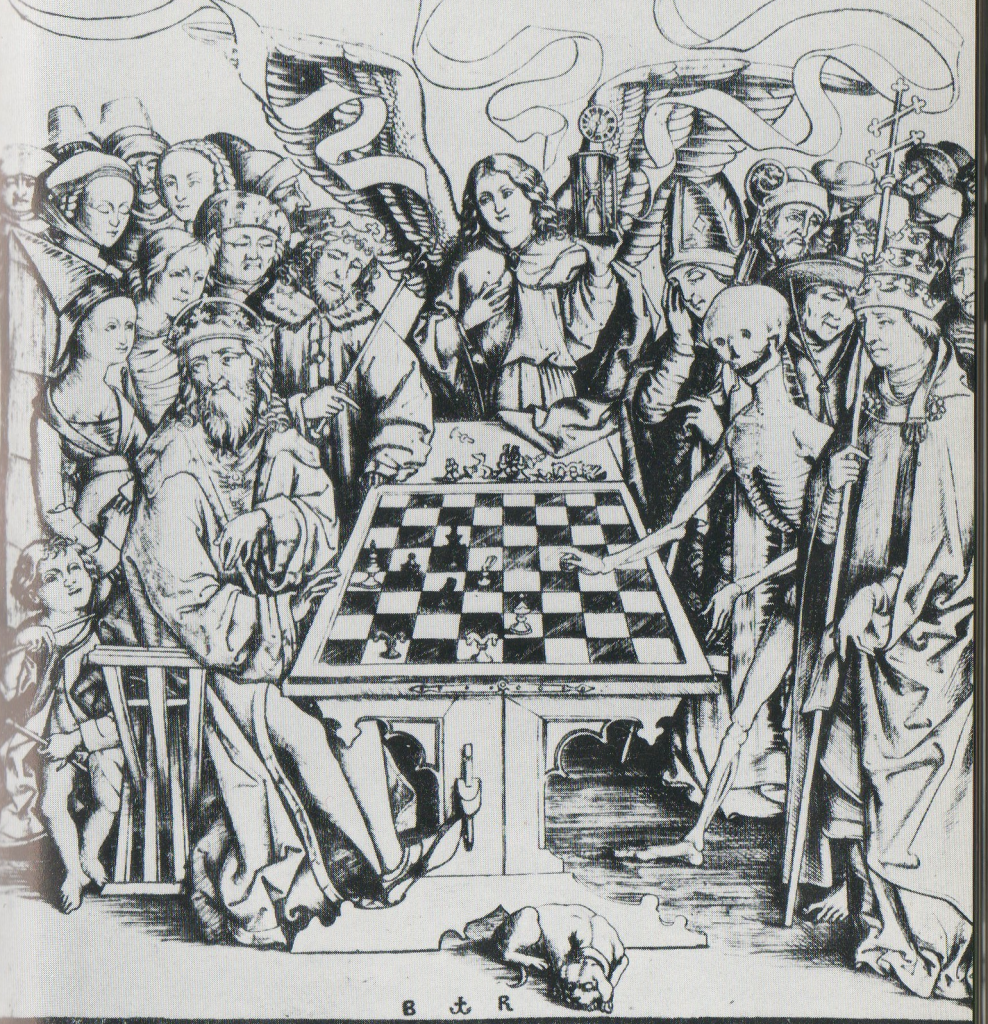 Man playing chess against death is a classical theme, referenced in mediaeval times as well as Terry Pratchett books. Generally, death seems to win these games. Here, too, his opponent is in quite a pickle. Perhaps even in a full-grown cucumber: he’s been checkmated.

I’m quite sure that the intended effect is that of general dread for the grim reaper’s inevitable visit or some such thing, but I prefer to think death has just told a really, really cheesy joke. He himself with the sly grin of a successful punner, the bishop next to him facepalming, the pope clearly ruing the day he swore to be forgiving, the king looking away in disgust – it all fits. Even the angel seems to be looking for non-verbal permission to conk death on the noggin.2 (With the wood of the hourglass and the bare bone of death’s skull, that would give a highly satisfactory cracking sound.) Only the woman on the left is vacantly staring into space3 and the dog is just happy everyone’s crowding on the other side of the table.

But let’s talk a bit about the position. This is the first time I have some trouble in recognizing the pieces. The one on h2 can safely be assumed to be a knight and the tall pieces must be kings, but what about the others? Since the name of this engraving is checkmate the king, the piece on e2 is almost surely a queen. If there was a rook on e4 it wouldn’t be a checkmate and if it was a bishop the position would be illegal, so we can safely conclude that the position is as follows:4 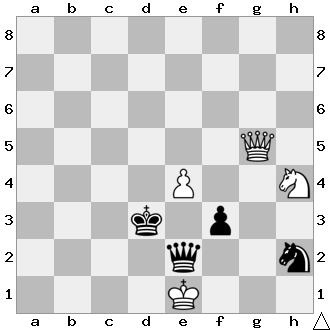 except that the bottom right square is black, but I cannot complain about that: by the time this engraving was made, the convention that h1 is white was not in place yet. This brings us to a rather interesting point, actually: the movement of the pieces in mediaeval times was not as it is now. The main difference was in the queen’s movement, which was limited to one measly square per turn – and only diagonally. The rules as we know them, with the queen as the most powerful piece, originated in Spain during the reign of Isabella I5 and then dissipated throughout Europe. Obviously, with the old rules, the position above would not be a checkmate which makes the claimed date of 1475 barely possible, since Isabella took the throne in 1474. More than likely, it was made at least a few years later.

I have not been able to find a game with this exact position, but it seems likely enough. Generally, the fewer pieces are left, the more likely a position is to look reasonable – and this is no exception. Most likely, black has just dealt the coup de grâce after a series of checks. The only thing that seems a bit strange to me is that white’s e-pawn has survived until deep into the endgame.

Realism: 4/5 As far I’m aware, the position has not occurred in practice, but much less likely positions have.

Probable winner: Death, but depending on the audience’s patience with bad jokes, his future might be bleak.