The X-men, as most of you doubtlessly know, are an American team of superheroes. They get their name from their mentor, professor Xavier, and the fact that the X is the most x-treme letter of the alphabet. The team is composed of a number of powerful mutants like Wolverine, a super-regenerating strongman with retractable bone claws, Storm, who can fly and control the weather, and Cyclops, who can shoot energy beams out of his eyes. There are any number of comic books, cartoons, and computer games about the X-men, but we will talk about the 2000 movie, for there is something about it that strikes me as somewhat implausible. Allow me to demonstrate.

We find professor Xavier, played by Patrick Stewart, pitted against Magneto, played by Ian McKellan. This is probably the only change to see captain Picard face Gandalf at chess. They are using a very fanciful but rather impractical set. I must admit, in fact, that I am not completely sure which pieces are white. I am guessing the opaque ones, if for nothing else then because of the symbolism of the good guy playing white, but in that case the black pieces would be translucent – the exact opposite of black. Anyway, back to the scene.

During the game, the opponents talk about the fate of mutants in an unwelcoming world – but we don’t care about that, we want some chess goddammit! Let’s take a look at the position:1 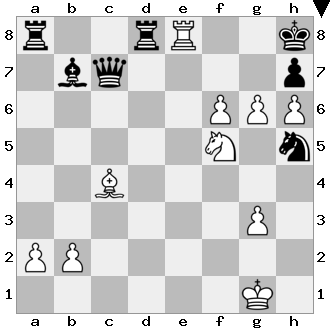 Did you see that? No? Look again, then. Do you see something strange? Some discrepancy between this diagram and the screenshot above, perhaps? Yes, you’re right and I must plead guilty: I left out a white knight and queen that have penetrated deep into the black position. I have my reasons, though. In the first picture I showed you, white has just captured a knight on e8. Black recaptures and white pushes his pawn to g7. In the picture below you can see black reaching for his knight to take the insolent intruder.

Well, bugger. White’s queen and knight have disappeared! I didn’t know invisible woman was in the X-men – and I have never heard of an invisible horse in the Marvel universe.2 In fact, a close look at the scene learns that whenever there is a close up shot of the board, white’s queen and knight are missing. When the scene switches to a zoomed-out view, they pop into existence again, like blinkers in the game of life.

Apart form the temporarily existence-impaired elements in white’s forces, the position is relatively believable. Admittedly, it is very unclear what happened to black’s queenside pawns and white is down an enormous amount of material, but the former is not too serious a problem and the latter could be the result of a long series of tactical blows. In fact, white has started a rather pretty combination on the kingside which will lead to a mate in two more moves.

Unfortunately, the scene ends before white can deal the finishing blow. Why do these movies always drop the most interesting plot points? I said it once and I’ll say it again: bugger.

Realism: 3/5 The position is acceptable. White’s kingside pawns are in a rather strange formation, but there is nothing too improbable about it.

Probable winner: Professor Xavier. I think it is safe to assume he calculated his little trick well and will bring it to a safe end.

1. [Diagrams have mutated from the standard starting position.]↩
2. [Wonder Woman had an invisible plane at some point, but she’s DC.]↩