By: Nikolaas VerhulstPosted on March 7, 2017

After dealing with comic books, television series, a computer game, and a commercial I feel it’s high time I tackled a movie. And what better movie to start with than John Carpenter’s The Thing from 1982? It’s about a bunch of scientists stuck on Antarctica that find something nasty in the ice.1 Something which absorbs living creatures and camouflages itself as them. The film is at the time of writing in the imdb top 250 and I can confirm that it is indeed very good. At the beginning of the movie, before things go pear-shaped, we can spot a smirking Kurt Russell2 playing a helicopter pilot by the name of MacReady and a leisurely game of chess against a computer. Let’s dive right in, because there’s a lot to talk about.

His opponent is called Chess Wizard, so it’s probably supposed to be a dedicated machine, but it looks suspiciously like an Apple II.3 The program he’s playing against seems to be inspired by Sargon, one of the first and most famous pieces of chess software, well-known for having lost a game against Botvinnik. Sargon wasn’t strong enough to seriously challenge advanced players and presumably the same is true for Chess Wizard. So how does MacReady fare against it? Well, the first position we see on the screen is as follows:4 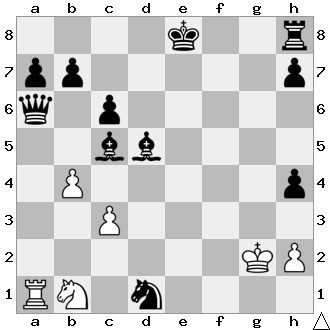 It is not made entirely clear which colour MacReady is playing but he’s to move and white is in check, so he must be playing white. What he’s smirking about I don’t know, because a position can’t be much more lost than his. Usually, when one says black has the bishop pair, the unspoken assumption is that white instead has knight and bishop or two knights. Here, however, black is a bishop pair up. Plus a queen and two pawns. MacReady seems completely unphased by this. He hits four keys, prompting the computer’s voice module to say

Huh?! White doesn’t have a bishop and even if he had one B-N4 would be an illegal move since it doesn’t cover the check. Besides, who uses the English notation in this day and age? Before we can recover from our shock, we hear

Another illegal move! What on earth is going on? Did the thing take over the chess board?

MacReady: Poor baby. You’re starting to lose it, aren’t you?

Yeah, that seems to sum things up quite well. MacReady hits three more keys and we get another view of the position: 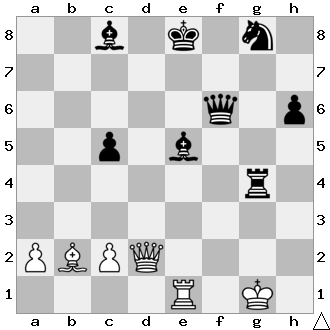 Whabwuh? How did we end up here? Why does white have a queen now? How did his pawns retreat? No, there must be a different explanation. Maybe Some of MacReady’s keystrokes were used to load a previously saved game. He made a move in that game, his opponent made a move, and then he must have loaded a third game. Yes, that’s it! The world makes sense again! Once more, MacReady rattles a bit on his keyboard – but this time we see his move being carried out, so no fourth game is loaded.

I agree. Rook to knight 6 is not  a checkmate. It’s a horrible move, in fact, leaving the bishop on e5 hanging and throwing away a victory within reach. Qh4+ is hard to miss and mates in two moves. By the way, It might be worth mentioning that there is a theory that The Thing is actually about chess. It’s bollocks.

Realism: 1/5 It’s not the positions in themselves that are so impossible – especially the second one is quite plausible – but the way they come about. Who sits around loading old games for fun against a buggy computer?

Probable winner: I think MacReady scored a convincing if not conventional victory.

1. [Which, come to think of it, makes for an interesting explanation of the Dyatlov pass incident.]↩
2. [Twenty three years later a different film with Kurt Russell in a blizzard and music by Ennio Morricone was released. Interestingly, The Thing‘s score got Morricone a Razzie nomination while The Hateful Eight won him an Oscar. Still, the former is a better movie.]↩
3. [Probably because it is an Apple II.]↩
4. [Diagrams made with this thing.]↩