Kiekeboe is a family adventure comic series which is hugely popular in Flanders and, to some extend, the Netherlands. The series has been running for more than four decades and well over a hundred volumes. Especially in the beginning of the series, the stories were often inspired by whatever happened to be in the news. In those days, that meant things like Idi Amin Dada, the Bermuda triangle, or the Karpov vs. Korchnoi world championship matches. The plot of the fourteenth volume is about a grandmaster trying to lay his hands on the chips of a supposedly unbeatable computer. Unsurprisingly, things do not go as smoothly as he hopes, and while his goons are desperately trying to get the blasted things, he’s playing the first games of his match. 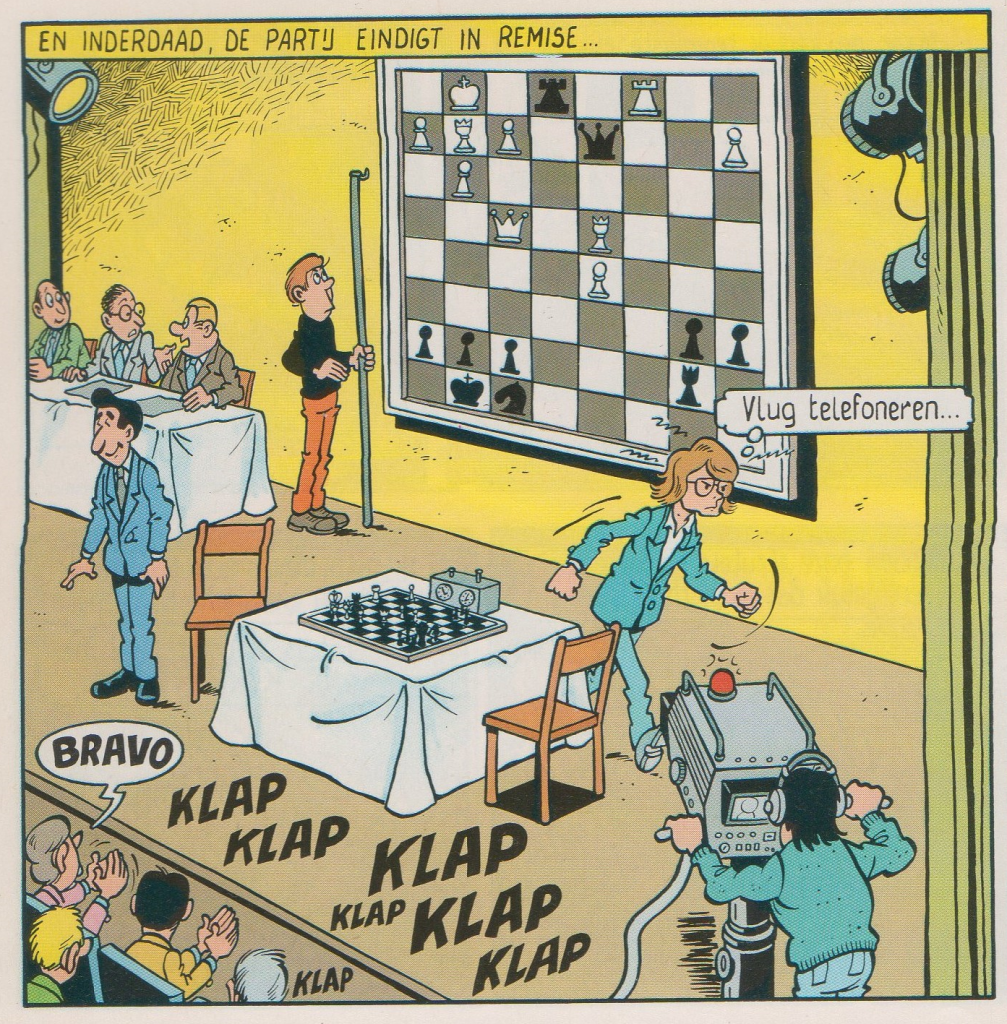 The guy walking away on the right, Béber Tsuklatski, is the one looking for the chips and his opponent, world champion Koppaf, is the black haired fellow. The three men behind the desk on the left are no doubt tournament officials and the guy with the stick is responsible for the demonstration board on the wall. Why this is not done by on of the tournament officials – or why they don’t give the poor chap a chair at least – remains unclear.

At this point, you might be wondering why I picked this as a topic for my blog. After all, the position doesn’t seem too weird, there are no pieces teetering on the border of existence, the orientation of the board is correct – what more could one want?1 Well, there is something weird about the captions. Starting on the previous page, there is a dialogue between the protagonist’s son – with the improbable name of Konstantinopel2 – and the author:3

Konstantinopel: It’s not looking well for Tsuklatski. The only thing he can do is resign.
Caption: And indeed, the game ends in a draw.

… I guess somebody doesn’t know what a draw is. The extraordinary things is that this is a situation where both a resignation and a draw seem unlikely. Since the demonstration board shows the position very clearly, there is perhaps no need for a separate diagram, but I made one anyway:4 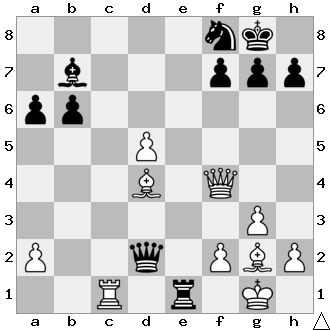 Clearly, white is to move and he has no real alternative to Rxe1 Qxe1+ Bf1, but here white definitely has an edge, perhaps even a rather sharp one. For example, Bxd5 would fail on Qg5 with a mating threat and an attack on black’s bishop. Still, I wouldn’t expect someone to resign here, especially not in a world championship match.

However, there might be a different reason for his resignation: his king is attacked and he’s not even to move! An extraordinary claim, I know, but the clock next to the board leaves us no alternative conclusion: it’s black’s move. And then, of course, the white king is in serious problems indeed.

Realism: 3/5 Once more, the position seems perfectly plausible. I’m only wondering how the black queen got to where she is.

Probable winner: None, I would say. With correct defence, I think the position should be tenable.

A bit further in the same volume, we find another image, which I’ll throw in as a boon: 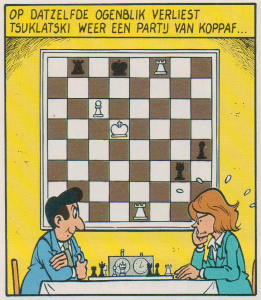 The caption claims that “Tsuklatski loses another game”. This clearly means that he’s playing black and consequently that the demonstration board shows, once again and against every convention, white on top.