Obscure engravings, highly local comics series – the ‘popular’ in the name of this blog has become somewhat spurious lately. High time, I think, to go back to more well-known things. Things like Tintin. The famous reporter that does no reporting can be seen playing chess a few times in the series. The most famous instance is probably in Tintin in Tibet, where our eponymic hero is playing captain Haddock in a Swiss hotel. Unfortunately, we don’t get a good view of the board there, so instead we go back to Tintin’s first visit to South America in volume 51 of the series: The broken ear. Tintin has been made colonel and aide-de-camp of general Alcazar. Together they can be seen trying to solve the myriad problems a successful revolution faces. 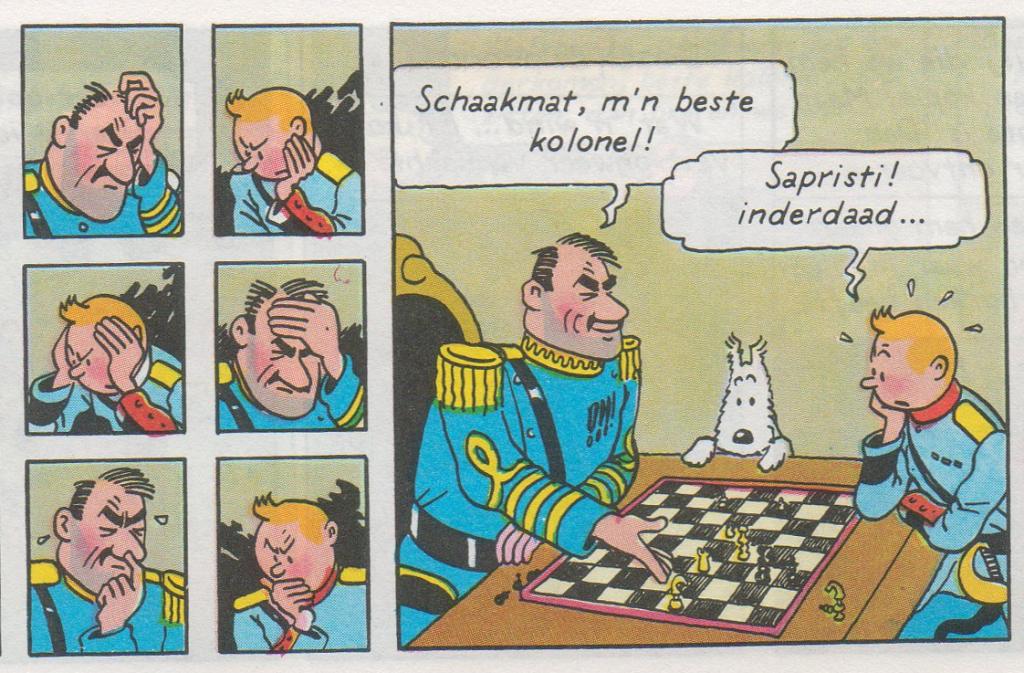 The text on the right can be translated2 more or less as follows:

Rarely has the concentrated effort of a long game of chess been captured quite as nicely as in the six small images on the left. The image on the right is a bit of a disappointment in comparison. Oh, the drawing is still excellent; Alcazar’s clear glee, Snowy’s look of utter incomprehension: it’s all top notch – but the position is awful.

First of all, white’s king seems to be missing and in chess even the staunchest republican needs a king. However, this is not that big of a problem since it might simply be hidden behind Alcazar’s arm, probably on e1. A bigger problem is that the position seems to be illegal. I’m not completely sure about the identity of all the pieces, but seeing how it’s supposed to be a checkmate and seeing that the pieces on h5 and f5 are clearly a knight and a rook respectively, the following position seems the only candidate:3 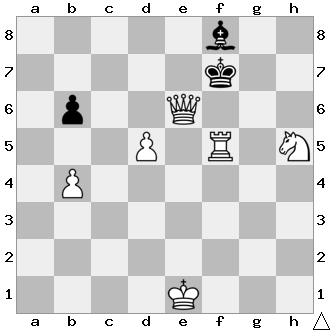 although admittedly the pawn on b6 might just as easily be a white one. Tintin’s forces have been dwindling. Only one bishop and a single peasant4 remain faithfully by his side against the forces of the revolution which, in a movie, would guarantee his ultimate victory. Here, however, he is what is in technical terms called toast.

But how, one wonders, did he get to be like that? What could possibly be white’s last move? There couldn’t have been one; general Alcazar must have been cheating. Which, admittedly, fits perfectly well within his character. And it is perfectly conceivable that Tintin, given the circumstances, doesn’t dare to protest.

Realism: 0/5 This is the first time I deal with an illegal position. It’s… It’s not a pretty sight. Oh God, that queen and rook crowding so close to that poor king, that knight sadistically looking on from afar, closing the last possible way out… I’m getting sick.

Probable winner: I… I think I need to lay down for a moment.