Fourteenth instalment! Finally a nice round number!1 That deserves something special, I’d say. Something very special indeed: I’m going to watch a movie. More specifically, I’m going to watch Knight moves, an obscure 1992 film about a chess grandmaster getting mixed up in a serial killer case, and am going to write my impressions along the way. Clearly, there will be a good deal of chess to discuss, but this time I’ll try to pay attention to the plot as well. The main stars are Christopher Lambert, fresh from the enormous success2 of Highlander II, and one of the lesser Baldwins. What could go wrong? Let’s find out… 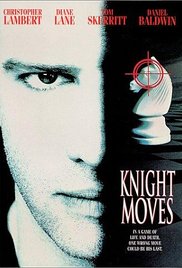 We begin with a very blue shot of the 1972 Washington state chess tournament. There is no junior in the title, so this is probably some open tournament, yet the two last players in the arena are two young kids. What gives? Usually, the younger a player, the sooner he finishes his game. Still, this scene bodes very well for the rest of the movie: the flags would fall at six o’clock as is really the custom with old Gardé clocks – there’s somebody here who know his stuff! The scene ends with white pushing over his king and attacking his opponent, wielding that most dreaded of all weapons: a fountain pen.

The same kid again. His father has left. His mother, apparently a drunkard, commits suicide by slitting her wrists. The kid takes advantage of this to get his chess set again, which has been locked away after the incident of the opening scene, and he starts a game against himself. This scene is supposed to show us that pure malice hides behind those innocent looking eyes, and indeed, he plays the Réti.

Ahah! This is the real stuff: we see a chess tournament, where Christopher Lambert wins his game. This is the position: 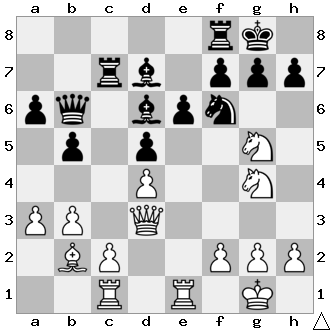 and black plays Ne4. Lambert captures the knight with his rook, there follows dxe4 Qh3 and black resigns. A rather pretty combination, but not too hard. Lambert’s opponent is called grandmaster Lutz, by the way. That’s a point for realism, I guess, but they play far too quickly for it to be convincing.

There is a sex scene. With a chess master. And here I was talking about realism. Obviously, the woman is immediately killed: she is bound and her wrists are slit. Exactly the way that brat’s mother committed suicide. Very symbolic.

Apparently, Lambert won two games in one day?! In a candidates‘ tournament, no less. What strange and undiscovered country is this? This opens the door for all kinds of unlikely suspects. Maybe a moogle did it?

Lambert gets a call from the murderer, and immediately thereafter a card with a picture of the murdered woman. The murderer promises to call back. The police suspect Lambert is somehow involved and they send a sexy psychologist after him to find out whether – sorry, how crazy he is. Lambert doesn’t fall for the ruse, though.

A woman doing her laundry in a scarily lit basement. This is not going to end well.

Lambert wins a game against BattleChess3 which makes him ecstatic. Why? Even I can win against BattleChess. The murderer calls again and leaves them a riddle which the police obviously can’t crack. Sexy psychologist tries to get Lambert to help, but he refuses. She is amazed and appalled he’d choose a chess game over helping her save a possible third victim. He doesn’t care.

Some random woman finds what appears to be a man lynched in her closet. She foolishly opens the cabinet door completely. Splat.

The chief of police gets a visit from the mayor complaining about the ramifications of the case for tourism. There’s so much wrong with this. I’m going to need a bigger blog.

Sexy psychiatrist visits Lambert and tells him about the third victim. She’s apparently over him not caring about the last victim.

A new call from the murderer. Afterwards, Lambert goes for a long walk on the beach with sexy psychologist. They share an umbrella; this might be serious.

Now there’s a sax playing! Is this….?

They’re also boring. It’s been ages since I saw a chess board. Hmpf. After their carnal conversation, sexy psychologist finds the names of the murdered girls circled in Lambert’s phone book and concludes from this that he’s the killer. The obligatory second act squabble takes place, but no lasting damage seems to be done.

Finally some chess again! Lambert leads with 9 wins, followed by Yurilivich on 8. The tournament director decides their games will be held separately, which is absolutely unheard of. Here is the position:4 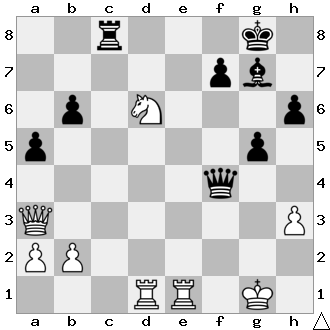 and Black plays Rc2. Lambert’s second claims it’s mate in five, which is bollocks. White is winning, but there’s no mate in 5. Lambert manages to play such an unbelievably stupid move (Qe3) that he gets mated in two moves.

Splat? Now that came out of nowhere…

The police finds out that all the girls got their apartments from the same agency. They’re trying to find out who had access to the agency’s computer system. This doesn’t lead to an immediate lead5 but things are heating up.

A new call from the killer, a new riddle. Maybe they should ask batman for help.

Nope, they find it out: he’s replaying a game Yurilivich played against Lambert by killing girls on the square Lambert’s opponent moved to. This makes no sense, since just the destination square is not sufficient information to determine a move, as any nincompoop would realise. Nevertheless, the police got an idea of where the next murder might take pace now.

Lambert is playing against Yurilivich again. The demonstration board goes all wonky, and this is taken as a reason to adjourn. My money’s on a moogle.

Spl… This time the killer is interrupted and the girl will survive.

Lambert visits sexy psychologist. He confesses that he feels guilty for his wife’s suicide: he got too obsessed with winning the previous candidates’ tournament and shut his wife out. It’s all very emotional, but surprisingly leads to no further sex scene.

After a quarrel between Lambert and one of the policemen, there’s a new call from the killer.

Sexy psychologist is booted of the case for sleeping with a suspect. She complains that they have five unsolved murders on hand. What? There have been only four, right? Four and a half, if we count the botched killing. Can’t she count? Well, she is a psychologist, so maybe. Anyway, she gets attacked, but manages to escape. She recognises a cut on the hand of her attacker which Lambert has as well. What’s more, Lambert’s second is found dead with a note saying he ‘can’t do it anymore’. The police suspect the second made the calls and Lambert did the killing. Sexy psychiatrist looks for solace (no, not that kind of solace) with her supervisor at the hospital.

Lambert is arrested and uses his one phone-call. He gets connected to the murderer who laughs in his face. While Lambert is left alone, he figures out that the murderer wants to kill his daughter. He manages to escape and locks the police up in their own cell. Consequently, nobody gets the call from sexy psychologist who has figured out Lambert is not the killer.

Erica, Lambert’s daughter, is playing Mario in the hotel. Inspector Wagner, who has been antagonising Lambert throughout the movie, turns up and takes her away before she can jump the pole. I think we’re supposed to believe he’s the killer or something, but that wouldn’t make a lick of sense, so we don’t.

Lambert makes it to the hotel and finds Wagner dead in his closet. He gets a call from the murderer and recognises the sound in the background on the caller’s end of the line. We’re off to our final.

We have our killer! It’s not a moogle after all; it’s the boy from the opening scene, who is now the tournament’s computer expert. Being a computer expert, he naturally is a hacker, which is how he got the data about the girls from the rental apartments agency’s computers. Lambert dukes it out with him but gets beaten. The chief of police shows up together with sexy psychiatrist who has freed and informed him. They prolong the battle just long enough for Lambert to wake up and shoot the bastard. End credits.