By: Nikolaas VerhulstPosted on August 1, 2017

I am not very knowledgeable about Friends.1 It’s a hugely popular television show which ran for approximately fifty bazillion seasons, that much I know, and I guess it’s about a group of friends, but I don’t even know how many elements that group has. The following picture proves that 2 is a lower bound, by showing the stronger statement that two elements in the group can be localised simultaneously in a single apartment. The two elements can even be chosen in such a way that they’re on both sides of a chess board – but it’s still an open question whether one can choose the position on that board to be sensible.

Wow. What a dollop of stupid. Let’s get the obvious out of the way: the orientation of the board is wrong – but that’s nothing new, of course. More interesting is what’s going on with the clock. Both players seem to be playing lightning chess, even though they have at least twenty more minutes until their flag falls. It even looks like black has an extra hour on his clock, since the hour-hand hasn’t passed four yet.

But that ain’t the worst of it. The players – both of ’em – play with one hand and hit the clock with the other. This is expressly forbidden by article 6.2b of the FIDÉ2 rules and probably disqualifies them for the show’s eponymous epithet.

But even that ain’t the worst of it. No, we’ll have to do the unimaginable and have a look at the actual position. Prepare yourself!3 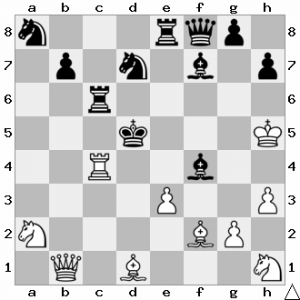 Yes, I’m pretty sure there’s a black pawn on g8. Yes , both kings are on the fifth rank. Yes, white is in check and black is to move. Did I mention that white just played e2-e3? Because that not only means that she ignored the check, but also that the bishop on d1 must be a promoted one. If we ignore all of that, I’d say the position is still very unrealistic. Whoever puts his bishops on d1 and f2? Who leaves his rook dangling on c4? What’s with these knights in the corners? Nobody puts Belgians in the corner!

I suspect that they’re playing the chess equivalent of calvinball and they’re just make up the rules as they go along. In fact, let’s listen to our protagonist4 for a moment

Dude on the right: We should really learn how to play the real way.

1. [The same holds true is you de-italicize and de-capitalize the last word.]↩
2. [The official abbreviation seems to drop the accent aigu. Does anybody know why?]↩
3 [Shudder.]↩
4. [Is he a protagonist? I don’t know. Maybe I should stick to things I know.]↩