The greatest rivalries of history and literature – the Montagues and the Capulets, the Hatfields and the McCoys, Barça and Real- pale in comparison to the rivalry between Pepsi Cola and Coca Cola. Since a long, long time ago, I spotlighted an old advertisement for Pepsi cola, I’d better do the same for a Coca Cola advertisement, lest I provoke fearful retribution from whichever company considers this as an unacceptable advantage for the other one. So here is a picture of some Coca Cola advertisement which appeared in Ebony, volume twenty-three number eleven from September 1968:1 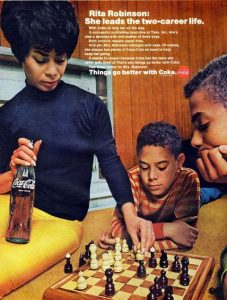 It seems like this Rita Robinson is – or was, at least – a real person, who really was working for Time inc. So it seems like this is a rare example of truth in advertising, but that ‘things go better with coke’ seems a rather strong claim for which no evidence is given.

The first thing to note are the weird pieces with which they’re playing. It is not unheard of for the bishop to have a differently coloured hat, but I don’t remember having ever seen such wide pieces. Especially the pawns look incredibly chonky.2

The second thing to note is that the position on the board is the following:3 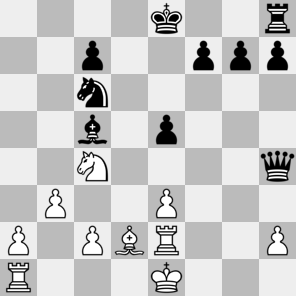 with the one caveat that the knight on c4 if actually not on c4 but hovering above it, held up by the powers that be – Rita Robinson in this case. And that’s rather puzzling. White is in check, so the knight can’t be moved to c4, nor can it block the check from c4. Even if they’re analysing this position, the knight’s immobility is perfectly obvious and needs no pointing out. Why would she be holding the knight? What is she teaching her kids?

Realism: 3/5 It’s not illegal. With the exception of the rook on e2, all pieces are on reasonable places. But the overall picture is highly suspicious. What happened to white’s king side? Or white’s queen, for that matter?

Probable winner: Black. Even with a passed a-pawn there’s no stopping black here; a queen for a rook should be enough.

1. [And presumably many other places.] ↩
2. [I’m in a bit of a conundrum here. Should I go with the obvious ‘fat American’ joke or with the just as obvious ‘drank too much coke’ one?] ↩
3. [Let me advertise the diagram editor I used.] ↩