Lelouch. Lamperouge. That’s seriously the name of the protagonist in this anime. No, really, you can look it up: he is actually called ‘the fishy red lamp’. Or ‘the ladle red lamp’, if the ‘louche’ is a noun instead of an adjective, but that somehow manages to make less sense. But I guess sense is far too high an expectation for an anime based on the premise that, in 2010, the empire of Britannia(!) invaded Japan(!) from their homeland in America(!!) using giant mechs(!!) and that one angsty high school student gets supernatural powers(!!!) called ‘geass’ from some girl who prefers to die instead of using it herself, because that’s perfectly logical. Also, judging from the title of the episode, getting this power apparently means that you turn into a demon, but that’s not so strange for an anime. The shady lamp1 uses his newfound power to lead a guerilla campaign against his native land of Britannia and for the freedom of Japan. Sometimes he plays chess. 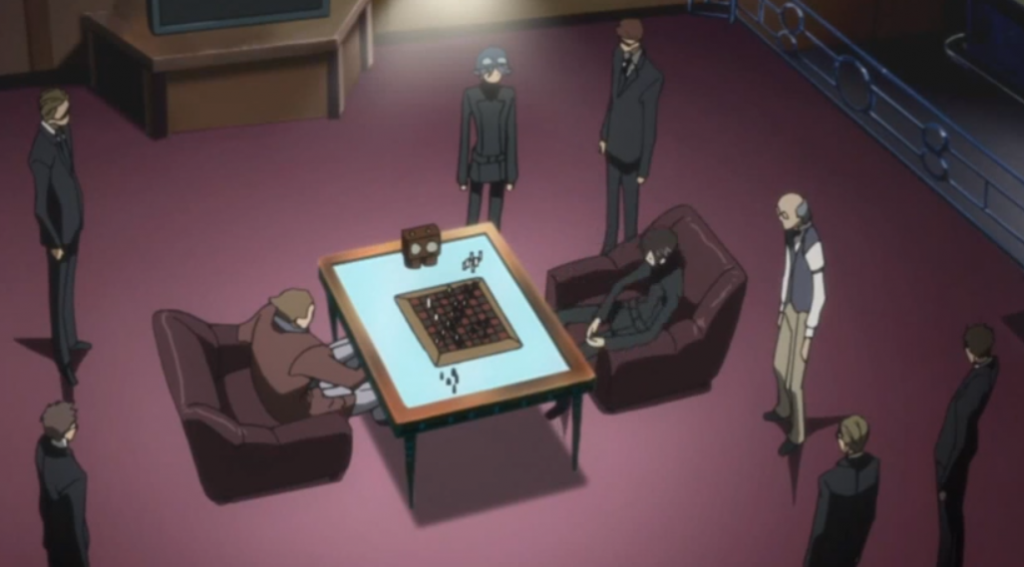 This picture comes from the first episode, between the escalation from two to three parenthesised exclamation marks. He has just taken over a game with the black pieces and they are under the restriction of 20 seconds per move, as his opponent has to leave soon. Lelouch2 grabs his king.

Some nobleman: You’re starting with the king? [laughs]

I have no idea where this hilarity comes form. Sure, if it was the starting position that would be strange, but it is not. The position on the first board is, with 100% certainty, the following:3 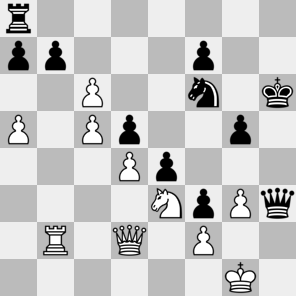 in which a king move for black is not only the most obvious but also the most accurate move. We don’t get to see which king move he plays, but it presumably is Kg6, after which the mate with Rh8 and Qh1 is unavoidable. At most it can be prolonged for one move with Qd1 and Qxf3.

So far nothing out of the ordinary. The weird thing here is the time. As mentioned before, they’re playing at a minimum speed of 20 seconds per move, yet Lelouch5 says after his victory:

The suspicious red lamp: 8 minutes 32 seconds is a new record.

Obviously, this is not an actual record; it’s just hyperbole on the part of the questionable light that is our protagonist. But 8’32” at a rate of at most 20″ per move implies a minimum of 26 moves. How on Earth did he still need 26 moves to finish?! It’s mate in 4! Not even a hard mate in 4! Or is he also counting the time his predecessor spend on the game? If so, how does he know that time? He just walked in! Plus, the record wouldn’t really be his, anyway.

Realism: 3/5 Well, this looks very much like a King’s Indian defence gone right for black, with white getting crushed on the kingside while his own attack is too slow. Still, I cannot give full marks for realism. I mean, Lelouch Lamperouge? (Also black’s g and h pawns having both moved to the left seems slightly suspicious.)

1. [Heh.] ↩
2. [I still can’t write that with a straight face.4] ↩
3. [Here you can make your own diagram, which you can then give some ridiculous name like Eltonto Toroazurro or something.] ↩
4. [The nice thing about that expression is that ‘I can’t write that with a straight face’ indeed means one writes it with a gay face.] ↩
5. [Gah! Seriously!.] ↩
6. [For god’s sake, they might as well call him Streetlamp Le Moose.] ↩