By: Nikolaas VerhulstPosted on September 3, 2019

Do I really have to write an introduction for The Sims? I probably do, don’t I? Fine. Here it goes: The Sims is a video game that was released in 2000, to critical and popular acclaim. In fact, it single-handedly put the real life simulations on the map of video game genres. The point of the game is nominally to give a population of virtual people a happy and fulfilling life by letting them develop hobbies and relationships, giving them nice houses, and getting them interesting jobs. In practice, people mostly use it to come up with new and creative ways to torture their virtual subjects. With the great success it enjoyed, a sequel was inevitable, and it is this sequel we’ll be talking about. It turns out that you can make your sims – that’s the name of the little characters whose life you are managing – play chess in it!1 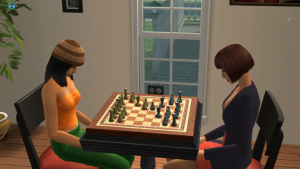 The first thing one notices when letting sims play chess is that they have a clock but don’t use it. Moreover, they take the same amount of time for all their moves, which is extremely suspicious. One also notices that the players use two hands when taking a piece, which goes against article 4.1 from the FIDÉ handbook of chess.

Finally, they talk during the game, but that’s perfectly normal as this seems to be a friendly game. Throughout the game a few sentences are repeated over and over again, now by white, then by black. There are some insightful remarks on the state of the game like my truth don’t fall no deer go fancy dear one or have a talk but also the usual health-based small talk like I sued my cavity and the rather enigmatic hm, Russia.

The position shown in the picture above is the following tabiya from the Panov-Botvinnik attack of the Caro-Kann:2 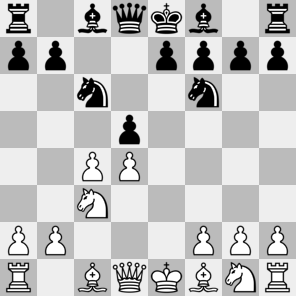 …which makes perfect sense. When did that start happening? The positions I deal with are usually nonsensical and not infrequently illegal. But this time, everything seems normal: the game the sims play – see below – follows the well-trodden paths of theory. Paths first trodden by Fischer in his famous game against Euwe3 from the 1960 olimpiad. In fact, it’s the exact same game!

Except that they don’t finish it. Black prematurely clears the board of pieces and abandons the game after her 30th move, six full moves before Euwe threw in the towel. I guess the simulation is not advanced enough for those last few moves.

Realism: 5/5 It was an actual game. How could it be more realistic? Although I must admit that it’s hard to believe that this was played between two amateurs in their living room at the rate of maybe three seconds per more.

Probable winner: White. I see no reason to believe that her technique will fail at this point. Hell, perhaps black putting away the pieces should be interpreted as resigning the game.

1. [I relied on this YouTube video for the screenshot and the, well, dialogue, I guess.] ↩
2. [In a future sequel, you might be able to let your sims make diagrams for you, but this has not been implemented yet.] ↩
3. [Being able to pronounce Euwe’s name is one of the few perks of being a native Dutch speaker.] ↩