Blackadder is a serious contender for the title of best TV-series in history. The first season was perhaps not great, but from season two to season six it is top-notch comedy, with Rowan Atkinson giving a consistently amazing performance as the sarcastic eponymic nobleman and Tony Robinson as his filthy and stupid sidekick Baldrick. Throughout the series, people like Stephen Fry and Hugh Laurie join the cast as supporting actors. In fact, in the fourth episode of the second series, we can see Stephen Fry as lord Melchett in a game of chess against none other than Queen Elizabeth I (Miranda Richardson). 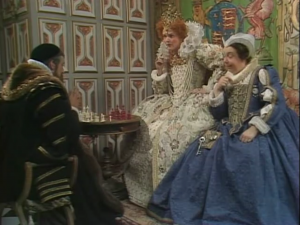 The plot of this episode is that a broke Blackadder is being pestered by the bishop of Bath and Wells, to whom he is indebted. To make matters worse (‘the path of my life is strewn with cow pads from the devil’s own satanic herds’ is how he expresses it), he is the victim of an infantile practical joke that the queen plays on him and he loses his last money. That’s very sad for him, but of no concern to us – he isn’t playing chess!

So let us focus on Lord Melchett and the queen. Unfortunately, it turns out that the secrets of the crown were quite well-protected in the sixteenth century and it is nearly impossible to make out what’s happening on the board. The pieces they are playing with look an awful lot like a barleycorn set. These sets were, as far I can tell, not produced much before 1800, let alone 1700 – and Elizabeth I died in 1603! How were people outraged by a coffee cup on the Game of Thrones set but not by such an atrocious anachronism?!

But what’s the position like? Excellent question! Unfortunately, I have no excellent answer. It looks like not much has happened so far: the white pieces are on the white side, the red1 pieces are on the red side. Perhaps only something like 1. g3 d6 has been played, but it’s impossible to say.

Probable winner: I’m pretty sure that Lord Melchett is smarter and better at chess than the queen, but he is also a political opportunist, so I think that the queen will probably win.

1. [Yeah, that’s another problem with this whole scene.] ↩