State Farm is one of those things, like red sups and school shootings, which most of the world is only familiar with through American media. In this case, the familiarity mostly comes from State Farm’s jingle “Like a good neighbour, State Farm is there” which is often referenced,
1 subverted or not, in movies, television series, and the like. It is an insurance company, which took its start in the twenties — the nineteen twenties, to be clear — selling car insurance. At least, that’s what Wikipedia claims. I don’t really care. What I do care about, is the following screenshot coming from a 2018 commercial for the firm: 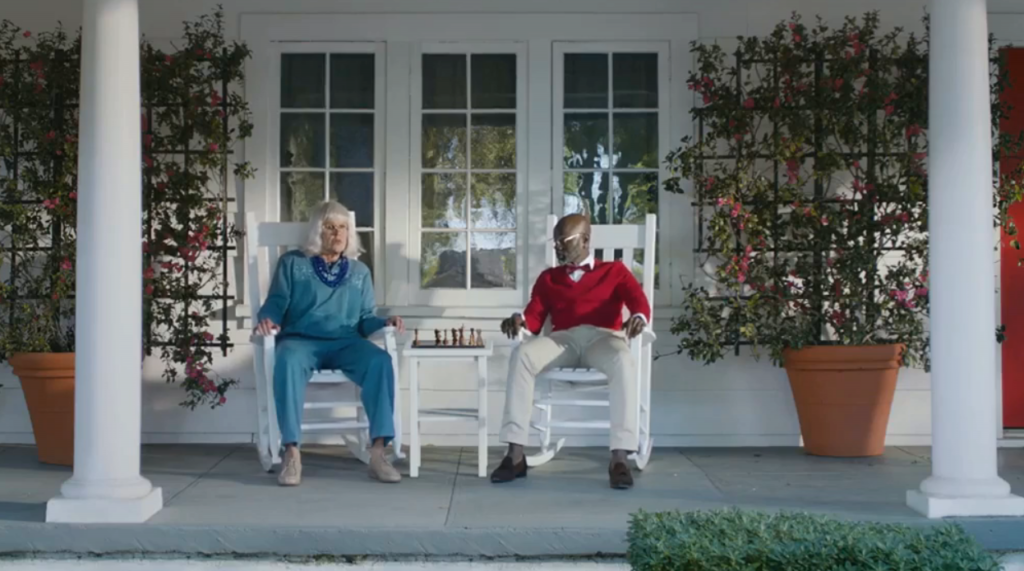 The idea of the commercial is that, whatever happens, the State Farm representative will be there for you. Even if you have grown old and need someone to play chess with on your porch. The implication is that this is what a good neighbour does, an idea I can very much get behind.

Unfortunately, the camera man decided to stay in front of it and kept quite far away from the board. In addition, the only shots we get of the board are taken at an almost horizontal angle which makes it very hard to find out what the position is. Matters are not helped by the fact that they are using a somewhat non-standard board which does not seem to be endowed with a border.2 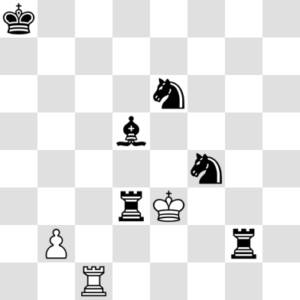 This is actually the position after we see the woman on the left play Rd4-d3#. The insurance salesman seems to have forewent taking an insurance on his pieces, because he’s down no less than three minor pieces and a rook. Or perhaps the premium was too high.

One conclusion is unavoidable, though: State Farm representatives will not only play chess with you but they will even let you win.

Realism: 4/5 Clearly, white has needlessly prolonged the game and his suffering, but that’s not uncommon in low level games. There are too few pieces to get really implausible positions. The only surprising thing is that white didn’t get mated sooner.

Probable winner: Even if my reconstruction is not completely correct and it’s not an immediate mate, black is still up a rook and three minor pieces for a pawn.

1. [To my great surprise, it was written by Barry Manilow! At least, according to Wikipedia.] ↩
2. [No need to take insurance against bad diagrams, just use this thing.] ↩