I have already written a blog post about a manga and one about an anime, but I have yet to talk about Japanese cinema. That’s going to change now. Today, I’m spotlighting Death note: The last name 2. It is the sequel to Death note, a critically acclaimed movie based on a manga of the same name about a guy, burdened with the name Light,1 who can kill people by writing their names in a notebook. He uses his power mainly to kill criminals who escape slip through the cracks of the justice system, but of course things don’t go very smoothly. In the beginning of the second movie, we see him being suspected  by the police and, more importantly, playing a game of chess with the leading detective. 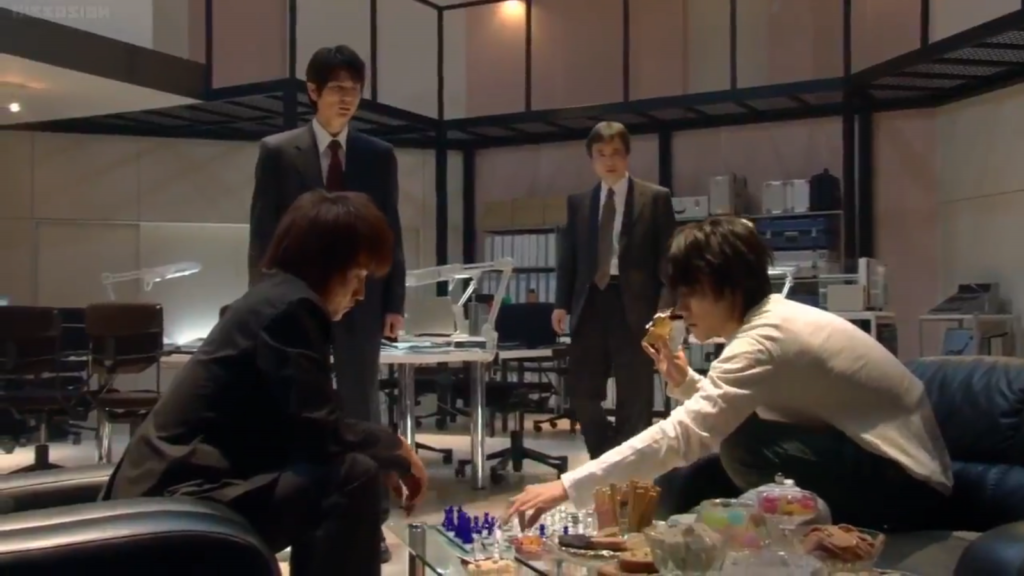 The guy on the right is the aforementioned detective and was playing alone. Then the guy on the left decided to just butt in and take the black pieces. That’s another strike against them.

And a8 is a dark square! Three strikes, they’re out! It’s a wonder their names don’t immediately end up in the notebook. The first position we get to see is a little bit like this:2 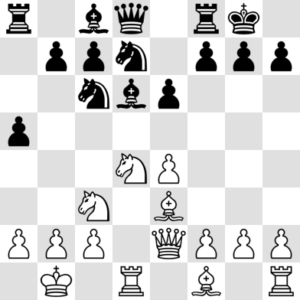 The first move Light makes is the phenomenally stupid h5 which runs into the obvious Qxh5. Up to that point, the position had be relatively plausible. Sure, there are some strange things, like white blocking his king’s bishop with his queen and black re-routing his king’s knight to d7 for no apparent reason, but nothing too extravagant has happened. In short, this is a position that two not-too-aggressive amateurs might actually get.

After h5 Qxh5, we see Nxd4 Bxd4 and then things get a little muddled. Until we see this: 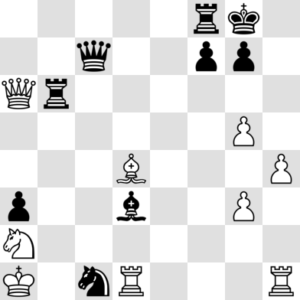 Well, we actually don’t get to see black’s king’s side pieces; I just assumed they stayed put. But it seems like many pieces got their names written in the notebook and some inexplicable manoeuvres must have taken place. The black knight somehow must have gotten to c1, for example, and white’s queen’s side pawns seem to have taken a trip to Jonestown.

Even putting that aside, it is very hard to see what could possibly have been white’s last move because, in this position, not only is white’s queen en prise but here is also the Nb3#, which Light indeed uses to put and end to his opponent’s misery. Apparently, this genius detective is an enormous moron.3

At least that explains why they’re having trouble finding their man.

Realism: 3/5 The original position would probably earn a 4, but I subtracted a point in view of the highly suspicious continuation.

Probable winner: Light. I don’t want to make light of the situation, but a checkmate is kind of hard to ignore.

1. [The movie is surprisingly light on puns about this.] ↩
2. [Have you always had trouble making nice diagrams? Let me show you the light.] ↩
3. [Maybe he would have fared better at go? That would confirm to the Japanese stereotype, at least.] ↩