After the horrors I had to endure last week, I think I deserve a bit of break. Something light-hearted, something fun. Something good, even. Which is why I watched Blazing saddles, a 1974 western comedy by Mel Brooks that enjoys wide and wholly justified critical acclaim.1 The plot deals with a corrupt politician trying to take over a town. When the town needs a new sheriff, he has a black man named Bart (played by Cleavon Little) appointed in the hope that the locals will either get rid of him and leave themselves unprotected or leave town themselves. One his first day on the job, the new sheriff meets and befriends the best sharpshooter in the west. It turns out that he likes to play chess.

Allegedly. I find it hard to believe that someone who actually likes to play chess would sit so uncomfortably angled away from the board. Or at least they wouldn’t look like they were falling asleep during the game.

But what about the position? Should I support the corrupt politician and try to get this sheriff either killed or banished? Let’s see! The orientation of the board is correct, at least, and when it comes to the pieces, well, they’re positioned as follows:2 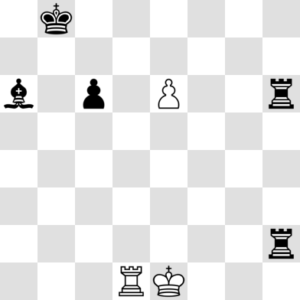 Bart, who is leading the black forces, is up a rook and bishop and is seen delivering the coup de grâce with Rhxe6#. Good, because that means we can safely side with the protagonist and we can enjoy watching the rest of the movie in which Burt proceeds to win over the town and kick his opponents’ collective asses.

It also means that Mel Brooks gets huge props for paying attention to the details in his movie. Or, possibly, for lucking out.

Realism: 4/5 There is nothing extraordinary about the position. It is clear that white is a beginner, for else he would have resigned a long time ago, but there are many beginners out there. This also explains the apparent lack of a plausible last move for white; he might have been in check on d2 or f2 and too chicken to head forward with his king.