Who is the most famous ghost in all of fiction? The obvious answer would be the ghosts of Christmas past, present, and future from Dickens’ A christmas carol. The more modernly inclined might think of nearly headless Nick from Rowling’s oeuvre. Perhaps some weird Flemish person might suggest Sus Antigoon. But no, the first name that popped in your mind when you read that question is Casper, because you read his name in this post’s title. Here he is, his shapeless self flying around between life-sized chess pieces. 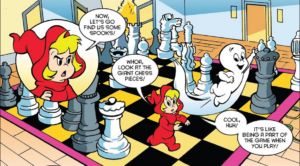 A little backstory for those of you not familiar with him: Casper is a friendly, young ghost. He started his career in the thirties in a series of cartoons, but has since starred in numerous tv series, movies, video games, and, as you probably noticed, comics. Really, really, crappy comics with plots more flimsy than a sheet of rice paper1 in which he is often accompanied by Wendy the good little witch. That’s the girl with the red onesie and witch’s hat. The point of this story is non-existent, but it claims to be about some exhibit called Chess world which is purportedly being haunted by something other than Casper. Our two heroes, of they deserve that name, decide to investigate.

The first thing they must have noted, before a mechanical king tries to cut Casper in two, is that the board is eight by seven. This would be a very remarkable fuck up for an exhibition about chess, but it is unfortunately not inconceivable. What’s worse is that the pieces are unidentifiable not because the resolution isn’t high enough but because the artwork is too crappy.  Some pieces are easily identified: there’s a white knight on e5, a white rook on f1, a ditto pawn on f5, the black queen on h5, and a white bishop that’s wondering whether it should quietly slip back into the game on h7. But what about the pieces to the left of the f1 rook? The first one is black’s king, no doubt, but then?

I tried comparing the socles to those of previously identified pieces, but with less success than a parakeet flying to the moon: they just don’t match with any of them. In fact, even the two white rooks are drawn completely differently. So I just made some random guesses about the pieces on b1, c1, and d1.2 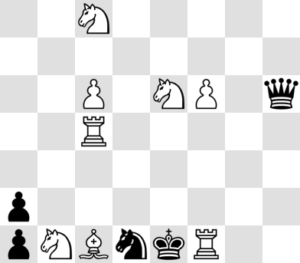 But it doesn’t really matter: the position is hopelessly broken any way. There is no white king in sight and there are obviously impossible pawns on the a-file.

And even is the board had the right size and the position wasn’t completely illegal it would still be an incomprehensible mess. Kind of like most sociology articles.

Realism: -/5 The existence of actual, honest-to-God ghosts, even friendly ones that are bald but have eyebrows, is more believable than this wreck of a position.

Probable winner: The lord of chaos, the dark seigneur of despondence, the hordes of the Dungeon Dimension and their sovereign Olk-Kalath, the soul sucker.

1. [Judging from what little I’ve seen, that seems to be a theme of American comics.] ↩
2. [Apronus, the friendly diagram editor.] ↩