If you were to ask me for my favourite sites, I would probably go on a tangent about how one should not assume that such orderings are linear and that therefore the question is moot. When pressed on the matter, I would probably give several, but one that’s sure to be on that list is archive.org. Not only does it host the wayback machine, but it also features a lot of public domain movies, television shows, books, and magazines. For example, there is the archive of The Saturday Evening Post going all the way back to 1821. If you decide to browse through them all, in the end — in fact, when you hit the edition of April 28th, 1932 — you will encounter the following image:1 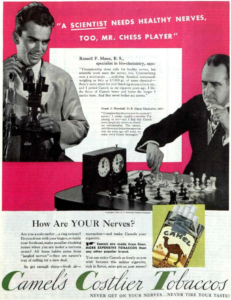 I have no idea who “Russell Mann, specialist in bio-chemistry” is, but the guy on the right is unmistakeably the great Frank James Marshall, once a challenger for the world championship and undisputed US champion for several decades. Here, he can be seen praising Camel cigarettes for not getting on his nerves (and probably a bunch of money).2

Of course, there is no way that an ad like this would be made nowadays, because Marshall is long dead already. Even if he hadn’t been, the health risks would prevent this kind of advertisement to be published in many countries. Back in 1932, there was already some research suggesting a possible link between smoking and lung cancer, but this wasn’t widespread information.

But let’s get back to the board:3 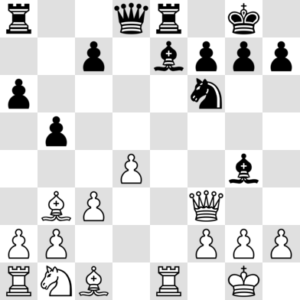 Perhaps white played 12. Re1 instead. This move is not at all popular, but it is not unheard of. Now 12. … Re8 seems like a reasonable reply and white could well have played 13. d4 — and now we’re stuck again. Black is almost at the diagram position: he only has to play Bg4. But there he is, impatiently tapping his foot waiting for white to go Qf3 first, but, alas!, it is his move already.

Which brings us to the problem of where this picture comes from. Who took a picture of Marshall, an actual top player, behind such a very strange position? Did someone else set up the board for a special photo shoot? If so, how did they manage to find a position that’s almost plausible? By accident? Did they look something up? But why didn’t they use a position from an actual Marshall game then? The chess community has a new mystery to obsess over.

Realism: 2/5 This is very hard. How does one judge a position like this? None of the pieces are in ridiculous places, but decent players aren’t going to just lose a move here as black and indecent players are not going to accidentally end up playing the Marshall attack.

Probable winner: Well, I don’t know who his opponent is, but Marshall seems like a safe bet.