The wire is one of the most critically acclaimed television series in history, charting at number six in IMDB’s top list at the time of writing. If we leave out documentaries — or, equivalently, David Attenborough series — it is even number four. It is about drug dealing in Baltimore as seen form both sides of the law. In the third episode of the first season, there is quite a famous scene where the lieutenant of some local drug cartel catches some of his crew huddled around a chess board. It is such a famous scene that one can find several people’s takes on it online, with detailed breakdowns of the symbolism involved and the way it reflects the culture of the impoverished urban youth of the USA. 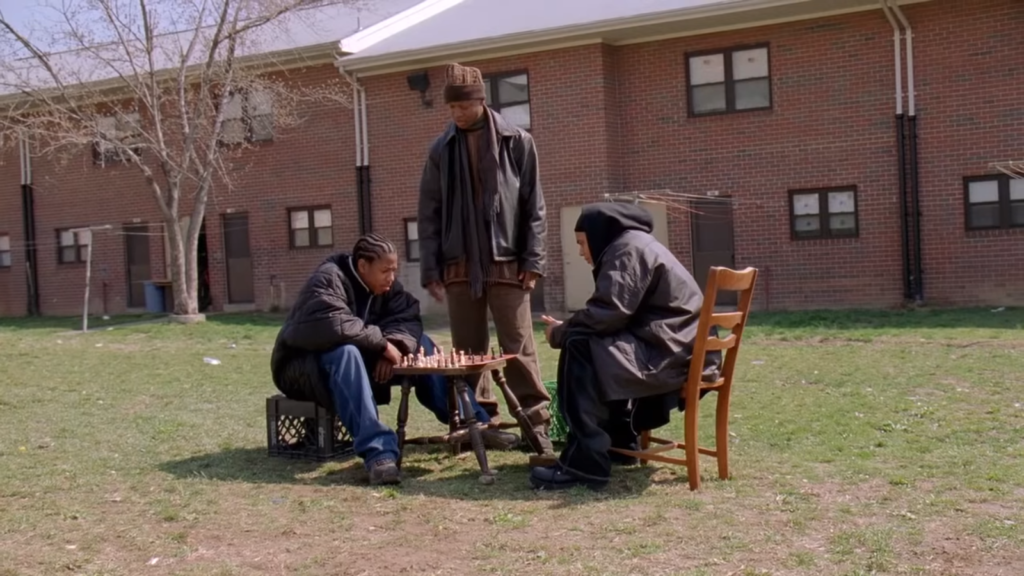 The main thing happening in this episode is that one gang of dealers gets a part of their drug stash stolen by a rival gang while the police is trying to repair the damage done by their involvement in a recent riot. Apparently, that’s what it’s about; I just gathered as much from the wikipedia post.

It is not at completely clear what the position on the board is, but I think it’s a little bit like this:1 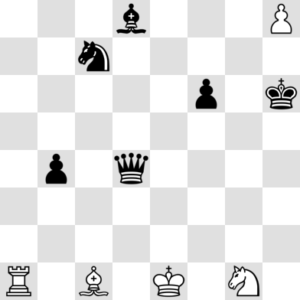 The first thing you probably notice  about the position — after you’ve stopped screaming about the abomination on h8 — is that all pieces are on black squares. There’s a horrible reason for that which will soon become apparent.

D’Angelo, the guy standing up in the picture, has seen the guy on the left move a rook diagonally. Indeed, it turns out that these assholes have been playing checkers on a chessboard.2 Of course, D’Angelo is not going to let them get away with that, because even gangsters have standards.

Realism: 0/5 There is no realism. Perhaps in the show, but not on the board.

Probable winner: I don’t know. I am not qualified to judge checkers position.