This is a blog about chess in popular culture, but I feel that my subjects haven’t been very popular lately. Who watches Wing commander? Who has heard of an obscure silent movie short from the twenties that was quite literally just filler material? Let’s instead go to the hotspot of modern popular culture: YouTube. TheOdd1sOut is not the most popular YouTuber but, at the time of writing, the channel has over 14 million subscribers — a respectable number at the very least. Its content consists of short, animated videos in which a broad range of subjects are presented. Like, for example, the video about tabletop games which appeared in October 2018. You may have encountered a stillshot from it in some form: 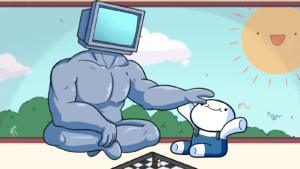 This scene is used to illustrate the fact that, nowadays, computers are so much stronger than humans that you have to seriously handicap them to have a chance.1 Apparently, it hit a nerve somewhere, because it was taken up in the whirlwind vortex of online discourse: it became a meme, used in every situation where someone lets someone else win or when someone encourages a novice by celebrating small achievements that they themselves barely recognise as such anymore.

The players are seated in this strange 90° position that occurs surprisingly often, probably for cinematic reasons. They have also set up the board wrongly, which occurs even more often. The position is so stupid that it doesn’t even deserve a diagram: there’s just a black king on d3 and a white pawn on d2. The little guy on the right pushes his pawn to d3 and raises his hands in victory.

But I would like to show you a screenshot from a bit earlier: 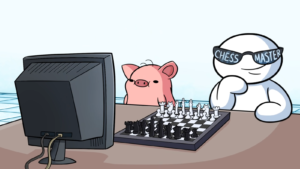 At first glance this looks pretty normal.2 Then you notice that this is not just a normal starting position: it is a starting position, stretched out over an 8×9 board! That’s a first! How do you even fuck something up like that? Wouldn’t it be much more natural to draw one piece per square?

But the madness doesn’t end there. A bit later in the video, the topic of chessboxing comes up and we are treated to a view of two players in the ring at their board and this position I don’t want to keep from you. Here is the reconstruction:3 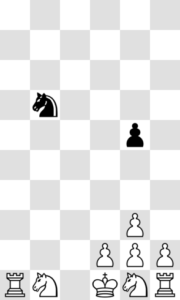 The most spectacular failure of a chess position in a long time! It’s a 6×10 board, black has no king, and the white pawn on g3 clearly has a criminal past.

I guess that, by this point, the players had already had a few rounds of boxing and can barely recognise their own hands any more, let alone a chess piece.

Probable winner: The even ones in.

1. [What is not mentioned in the video is that this only holds for good chess engines. The engines that any decent player could beat with his eyes closed might well outnumber the ones that he can’t.] ↩
2. [Well, apart from the bipedal pig.] ↩
3. [If you want to table your games, you should go here.] ↩