It is received wisdom that any video game based on a movie has an good chance to blow. Hard. In the bell-end of a horn. Similarly, it is a well-known proposition that any movie based on a video game is sure to be just as bad. This theorem is often attributed to Uwe Boll but, even though that worthy indeed made valiant efforts to prove it, it was known before. Boll’s first video game adaptations for the big screen came in the early two-thousands. Well after the Super Mario bros movie, the two Mortal Kombat movies, a Street Fighter movie, and our subject for today: Wing commander. I have never played any of the Wing commander games, but they are supposed to be pretty good, and the third one in the series had a cast consisting of, among others, Mark Hamill, Malcolm McDowell, and John Rhys-Davis. In the movie, we get Freddie Prinze Jr., Saffron Burrows, and Matthew Lillard instead. Yeah, the movie is not “pretty good”, it’s a solid hour and a half of stupidity.1

The above screenshot is from near the beginning. The idiot on the table in the background is, unfortunately, one of our main characters. He is introducing himself and his companion to the crew of the spaceship they just entered. Since he has the brain of a hard-boiled shrimp, it doesn’t go very well. But it seems like the director knew that he should focus as little as possible on Matthew Lillard2 and show some chess players instead.

Let us follow this very wise piece of advice and look what’s happening on the board. Immediately, I get a hit of nostalgia: the board has been set up wrongly with a1 a white square and, believe it or not, that’s been a while. The next thing we note it that, in the future, people apparently use really inconvenient, stumpy pieces that all look alike. That makes our task a bit harder, but we get good enough camera angles to make a reasonably reliable reconstruction:3 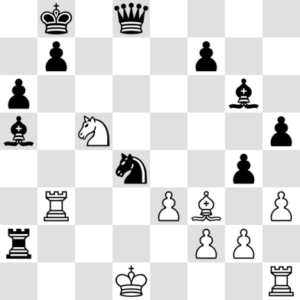 Lillard, who is watching the game, suggests:

Lillard: You want to take his castle with your little horsie.

A brilliant piece of advice, eloquently delivered. He goes on to claim, quite wrongly, that it is checkmate. This claim is immediately accepted, since this is a very stupid flick. Then lieutenant Forbes (Ginny Holder), who is playing black, makes a rather odd remark:

Ginny Holder: So, there’s a brain behind that man.

What on Earth does that mean? A brain behind that face I could understand, a brain behind that brawl, I could accept – it would even alliterate! – but a brain behind that man? This seems to suggest that ‘that man’ is devoid of such an organ himself and that he just functions as some kind of puppet to a disembodied cerebrum floating in the air behind him.

And, to be honest, given his behaviour in this movie it is entirely believable that he is controlled by some non-human entity.

Realism: 2/5 It is very clear that we’re not seeing good players in action here, since otherwise white would have resigned a long time ago, which means that almost anything is possible. Still, it is very hard to come up with a plausible last move for white. What could he possibly have been doing that’s more important than taking black’s knight and protecting his rook or his bishop? He could have moved out of check, but if if he was in check from the knight any idiot’s first instinct would be to capture the knight. If he was in check from the rook, he could have interposed his rook.

1. [For example, there is a point in the movie where the commodore hushes the crew of his spaceship because there is a destroyer looking for them and they might be heard. This is not played for laughs.] ↩
2. [By the way, is it just me or does that name sound like an insult? Like: “what did you do now, you useless lillard?”] ↩
3. [You can command your diagrams here.] ↩