By: Nikolaas VerhulstPosted on February 12, 2019

Today I’m absolutely in terra incognita, but sooner or later it had to happen. In this day and age, one cannot be a critic of popular culture without ending up talking about manga. So here we go. Okay. Well. Today’s subject is some kind of mango. Sorry, manga. Which is a general term for Japanese comics. That, in a nutshell, was pretty much my complete knowledge about the topic, so I headed to Wikipedia. Apparently, the title of the series means Blue exorcist and, presumably, it deals with an exorcist who’s blue –  whether that’s blue in the literal or figurative sense, or – God forbid, both – I don’t know. And frankly, I don’t care. The only thing I care about is: where is the chess? How is the chess? Where does it come from? Where does it go? 1 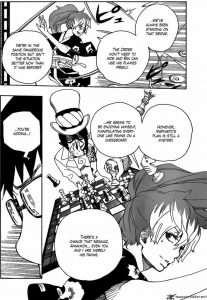 Weird, that’s the answer. That’s usually my reaction to things coming out of Japan, but it goes really far here. In fact, as far as I can ascertain, the person playing chess, immediately visible on the page, isn’t even in this scene! The whole image of him at the chess board is the artist taking the character’s metaphor describing their nemesis2 as chess master of manipulation literally and drawing him hanging in the void over some girl’s head, with a distinctly evil grin on his face.

But I’m getting distracted again by irrelevant things. Free floating visions of demonic dandies aside, what’s happening on the board? Well, that’s hard to say, as most of black’s position is obscured by a ponytail on the one hand and a big text balloon on the other, but the part of the board I can see looks like this:3 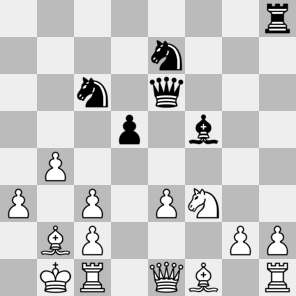 except that there’s also a white knight freely exploring the bounds of the page – it’s currently playing aureola to the aforementioned girl – a queen is precariously balancing on the border of the seahorse valley between two text balloons, and our friend the fiend has an additional pawn in his hand.

Of course, we have no idea how the black pieces are arranged, but the white pieces aren’t horribly placed. The king’s wing looks very normal. The fianchettoed queen’s bishop and the long castling are, considered individually, not uncommon, but look rather strange together. Also white’s pawn structure looks weird. But, hey, the few black pieces I can place are where they should be!

Probable winner: That’s hard to say, since half of the board is obscured, but judging from his grin, Mephisto is doing well.

1. [The image comes from mangareader.net. Which is a strange name, because the reader should be the one who reads, not the thing being read; the visiter, not the website.]↩
2. [Who is called Mephisto; arguably the most cliché names ever for a demon (which I presume he is) but it is appropriate for someone playing chess.]↩
2. [Such diagrams can be conjured up from here.]↩