By: Nikolaas VerhulstPosted on February 19, 2019

If you’ve been living under a rock for half your life, you are probably an invertebrate. Also, you might not know about The big bang theory.1 It is a TV-series about a quartet of nerdy roommates, their dumb blonde neighbour Penny, and a wide cast of supporting characters, the main selling point of the show apparently being that they are all absolutely insufferable. But four of the protagonists are supposed to be smart! This means that they play chess, so we will have to suffer through at least some of it. Through the 18th episode of the 5th season, for example, where we find Leonard (played by Belgian born Johnny Galecki) and his crush Penny (Kaley Cuoco) at the board. 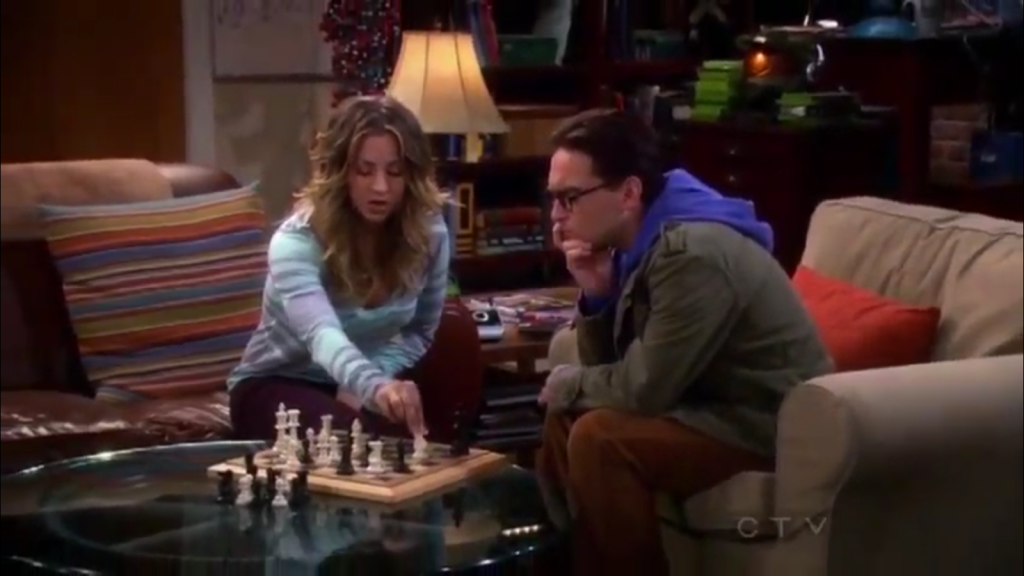 This particular episode, well, it presumably has something resembling a plot but it’s basically just an excuse for the usual antics of the fearsome foursome and their female friends. We are thrown into the scene from which the above screenshot comes without any kind of context, but from the conversation that follows we can sort of deduce that Leonard has been teaching Penny chess, and he has gotten himself into quite a pickle.

Let’s see what horrible position caused this guy – who is supposed to be a theoretical physicist and quite smart – to stare with deeply furrowed brow at the board. Luckily, we get some very clear shots of the current position and I can say with absolute confidence that when it looks like this:2 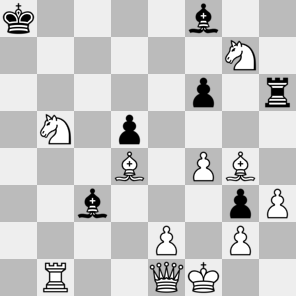 In the picture above, Penny is finishing the move Nc7, which is a checkmate. In order to provide a simulacrum of a joke, they have her explain that it’s checkmate by calling the knight a horsey, the rook a lighthouse and the bishop a “pointy-hat guy”3 – but there was really no need: this position would have the audience laughing their lungs out.

The most obvious improbabilities are than black has two dark-squared bishops and that their white, light-squared colleague on g4, too, must have a past as a pawn, for the original bishop could never have left f1. Even putting this aside, the position is highly implausible: What happened to black’s queen and two knights? How did the pawn get to g3? How on earth did white’s queen end up on e1? Why did black’s king run all the way to a8? What sort of opening gives white a pawn on f4 but keeps the e-pawn on the second rank?

The only possible explanation is that the pieces were thrown on the board haphazardly by some cataclysmic event. Like a big bang.

1. [My theory is that the name does not come from Lemaître’s theory about the expanding and cooling universe but rather about the theory that the show will end with one big party where everyone is banging, because that is what most of the show seems to be about.]↩
2. [The big board theory.]↩
3. [This is the most infuriating, because the modern Stauntons – that they are clearly playing with here – don’t look at all like a person with a pointy hat. The only possible explanation is that she was taught the name bishop but stubbornly refuses to use it.]↩