By: Nikolaas VerhulstPosted on February 6, 2019

The bone collector. With a title like that, who can blame me that I was expecting a thrilling tale of ruthless rivalry, fierce competition, and enormous piles of bones in a nice Victorian setting, in short, that I was expecting an in-depth documentary about the Marsh and Cope bone wars? But, alas, it was not to be. There are no triceratopses, no allosauruses, in fact, no palaeontological digs at all. There is just a dime-a-dollar giallo knock-of with a magnificently stupid plot centred around Denzel Washington playing a quadriplegic ex-police detective who guides a rather clueless patrol officer (Angelina Jolie) through crime scene after crime scene in search for the murderer du jour because he thinks she’s talented, for a reason which remains more of a mystery than who the killer is.1 At the beginning of the film, before the bodies start hitting the floor (or river, as the case may be), Denzel spends his time playing chess with his voice controlled computer.

This movie come out in 1999 which is the nineties, i.e. computer prehistory, so I can let them get away with the crappy screen and the unconvincing digital 3D board, but even in the nineties – hell, even in the eighteen nineties – black started on the seventh and eighth ranks, not on the first and second. Or am I supposed to believe that, even though our hero is playing black, we’re really looking at the board from the white side and that both armies somehow just sort of scuttled around each other? That would have been quite a spectacle to behold, especially for the pawns on what, if this theory is true, should be the queenside.

But the position you see above is actually not the first one we get to see. We first see the game when the position is the following – assuming, of course, that the square called a1 is really h8:2 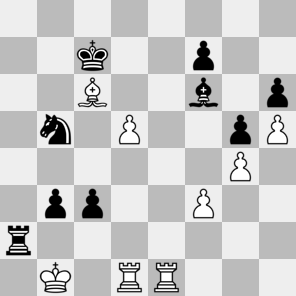 Here, the computer plays Re3, a move I would criticise heavily if there were decent alternatives. Black is incredibly satisfied with himself and answers Na3+ – Nh6+, he calls it – and gets interrupted by the police, who want his advice. Then, after the engine has responded with Kc1, he says “a3”, which is apparently interpreted as b2+. How does that make sense? Even in his backward coordinate system, b2 should be called g7, not a3.

This leaves us to wonder: how on earth did this error happen? How can someone know that there are coordinates in chess, that they consist of a letter from a to h and a number from 1 to 8, but not how they’re orientated? I can come up with one explanation: someone on set called a chess-playing friend to explain it, and the poor hapless chap, punt on the spot by a rather rare question, muttered something like: “Well, the ranks are numbered 1 to 8 from front to back and the files a to h from left to right” without specifying that this only works if you have white.

Realism: 3/5 The coordinate system is stupid to the bone but the actual position, once you get down to it, is not that implausible. It looks like black successfully sacrificed a exchange for a pawn in order to get two connected passed pawns on the queenside.

Probable winner: Denzel. He pumped up the jam.

1. [Although she did think of taking pictures of the crime scene. And she didn’t let it be run over by a train! Truly, she is a natural genius of crime scene investigation!]↩
2. [For the diagram collector.]↩